KEENEN IVORY WAYANS, Creator and Castmember - on connecting with FOX, and conceiving the show:
I had done a movie called I'm Gonna Git You Sucka. And it was a big success. And I had set up screenings of the movie for all the studios' film departments. But Fox didn't come. Instead they sent the TV execs. And so when I got a call, I thought I was going in to meet with the film side of Fox and instead ended up in a meeting with the network.
At that time, Fox wasn't even a network. They were a startup. And I really didn't have interest in that because I wanted to pursue film. But they said to me, "You know if you come here you can pretty much do anything you want to do." And I said, "Well, let me think about it." And then I kind of sat and said, "If I am given an opportunity like this, what would I do?" So I started to put together the show for the idea.
I remember using Laugh-In as a model during the pitch. I liked its quick pace. And, of course, I was a huge fan of Saturday Night Live. The difference was shorter sketches and more character-driven. I emphasized the edge of the show was going to be different. Fox bought the pilot. Then I picked my cast. Everyone wanted to be on it.
TOMMY DAVIDSON, Castmember - on landing the show, and Keenan giving them the freedom to push the envelope:
When I landed In Living Color, I was a hot comic. A week before getting the job I had met with Lorne Michaels in his office in 1990 [for a potential SNL spot]. He lined it up for me and said, "I don't want a black comedian. Eddie Murphy was a mistake. I don't want a person that stands out." I was confused. I was born black. There's not a zipper in the back of this thing. [A spokesperson for SNL replies: "This account is without merit. Chris Rock, Tim Meadows and Ellen Cleghorne were all hired into the cast between 1990 and 1991."]
Keenen gave us a mission statement to take the comedy as far as you can take it. He said, "The reason why we have you here is you're out of the box, so I'm going to take you out of the box and across the yard."
DAVID ALAN GRIER, Castmember - on landing the show, and them lampooning Hollywood:
I did my audition with Susie Essman, Chris Rock and Martin Lawrence. We improvised.
Spike Lee hated the show. He got really mad at us because he thought we were over-the-top about Do the Right Thing. He did not like us making fun of him. People would get angry when we poked fun at them. Arsenio Hall too — anybody that we really poked fun at.
IjM CARREY, Castmember - on landing the show, and some of the wickedly brilliant material that never made it onto the screen:
I had known Damon through the stand-up circuit, and we were always kind of clocking each other. He kind of admired what I was doing onstage. He told me, "Hey, crazy man, what do you think about coming in to audition for this thing? Come and meet my brother."
We were warped out of our minds. We presented several sketches that didn't make it on the air, things that were just too insane, like the abortion rally ventriloquist. We came up with a sketch called "Make a Death Wish Foundation" about a dead kid whose posthumous wish was to go to an amusement park. That did not make it on air, either. But I came up with the face of the kid, and it eventually turned into the "Fire Marshall Bill" face.
SHAWN WAYANS, Production Assistant, DJ, Castmember - on landing the show, and, A-listers loving the show:
I was a teenager. Keenen was telling me that he was working on something and might have something for me. He was always Superman to me. I've been watching my brother do some incredible sh*t since I was 5.
We were hot. Everybody in the industry would pop up on our set, from Eazy-E to Bruce Willis and Demi Moore. Sinead O'Connor came by. They just wanted to tell everybody what a wonderful show it was.
LARRY WILMORE, Writer - on landing the show, and network concerns about it being a live broadcast:
I came on in the third season. Before that, people would ask, "What do you do?" I'd say I was a stand-up comedian. "Oh, that's interesting." But when I said, "I write for In Living Color," oh my God, they would lose their minds.
I wrote the "Men on Football" sketch. There were so many sexual innuendos just built in. But we got a lot of support from the gay community — people loved those characters. Damon and David had so much fun playing them, they were enjoying it so much that there was something infectious about it. But [the network] was very concerned because it was live. 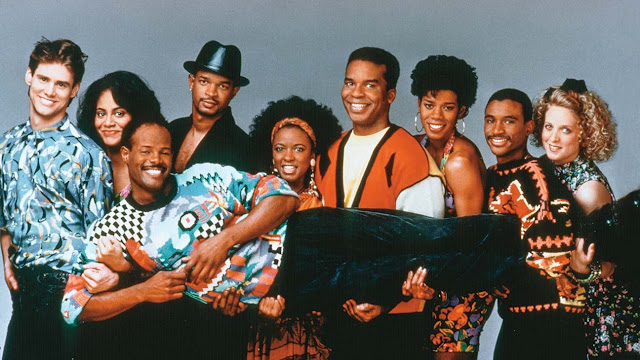 
"We were warped out of our minds." 25 years after the groundbreaking sketch show #InLivingColor left the airwaves in a blaze of controversy and conflict, the cast and crew share never-told behind-the-scenes stories of the series in a dishy oral history. Link in bio.
A post shared by Hollywood Reporter (@hollywoodreporter) on Jun 21, 2019 at 8:30am PDT