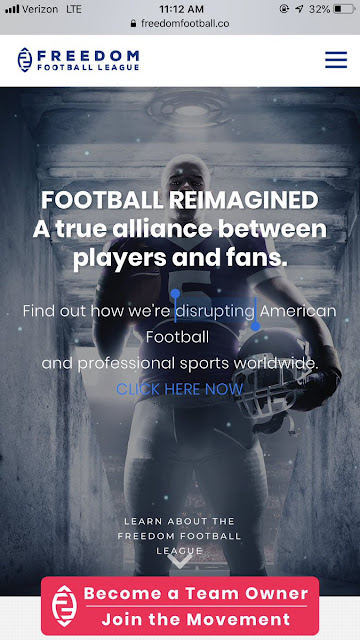 
"The purpose of this league ... is about community and the development of players. In thinking about creating this league, I wanted to create a league that I could have stayed in and been comfortable and really thrived.

The NFL started a long time ago, and since then a lot of things have changed. And we want to create a league that's ready for that change and invite some more of it.

We're trying to develop young men. You can't take away their voice and expect them to develop. ... When I grew up watching football, I really wanted to be like Jim Brown, not because of what he did on a field, but because he could take that platform and have a voice.

And so, when I got to the NFL, expecting that to be the case, anytime a big social issue came up, we were told, 'Be quiet. ... It's a distraction.' And so, really, [we're] changing the conversation."

According to the FFL, the league would initially have 10 teams -- with plans to expand into additional locations -- and games would take place during the spring and summer.
The league did not say when it would begin play, though it did say the first 10 teams would be the San Diego Warriors, Oklahoma City Power, Portland Progress, Texas Revolution, Ohio Players, Florida Strong, Birmingham Kings, St. Louis Independence, Connecticut Underground and Oakland Panthers.
FFL said in a statement;

"... its mission is to attract football players at their highest level of athletic ability, including those defecting from the NFL, graduating college or high school or playing in international or alternative professional football leagues."

The league said it would be financed through a combination of private funding and public offerings in 2019, meaning fans would be "true owners and legally-committed business partners."
As for players, the FFL said it would ensure they would receive "permanent and reliable holistic health and wellness support on and off the field." In addition, the league said it would encourage athletes to address societal challenges and other "hot button" issues.
Are YOU following the FREEDOM FOOTBALL LEAGUE (FFL)???

Former NFL stars Ricky Williams & Terrell Owens are launching a new "Freedom Football League." Today on #espn's Outside The Lines Ricky Williams announced today a new league that was formed by former NFL players and will consist of 10 teams. The league will be partly owned by 50 NFL players, owned by the fans and partly owned by the operators. In total there will be over 100 stakeholders that will share revenue. The league said it would be financed through a multitude of different private funding entities and public offerings in 2019, which represents the fans would be "true owners and legally-committed business partners," said league officials. #to #rickywilliams #freedomfootballleague #thetickerreport
A post shared by @thetickerreport (@thetickerreport) on Dec 6, 2018 at 1:41pm PST