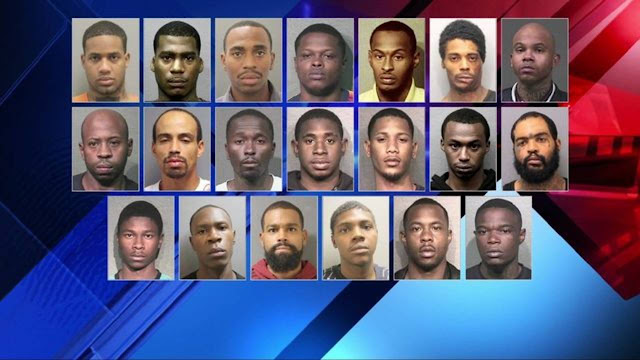 During the video shoot, may of the participants are visibly brandishing REAL weapons including handguns and semi-automatic assault weapons.

Filming was at Lakewood Park. The park is located right next to Hillard Elementary School and took place at about the same time as school dismissal. Several students from the school are featured in the video.

ABC12: SAN ANTONIO reports while the firearms were being used as props, the people holding them are documented gang members, the Houston station reported. Most of the gun-toting extras ran, leaving the weapons behind.

NFL Cartell Bo, a convicted felon, was charged with illegally possessing two assault rifles and with threatening a police officer. He was released on bond and was ordered to wear an ankle monitor, but HPD reports he cut it off and has been on the lam since.
Authorities said the video was uploaded to YouTube two months after it was filmed and that police used the video to track down and identify everyone in the video who was seen holding a weapon.
CLICK2HOUSTON reports aspiring Rapper KENYON TENNESSEE is shown in the video holding a child.
The video was filmed in March 2018, however; before he could be charged, KENYON TENNESSEE and another man were found killed in a car outside CLUB ONYX.
As of Monday, December 9, 11 of the suspects are either in state or federal custody. Nine suspects remain wanted for numerous open warrants
WANTED:
In CUSTODY, On BOND, or COMPLETED: