TIGER WOODS vs PHIL MICKELSON For $10 MILLION In LAS VEGAS During THANKSGIVING WEEKEND 2018!!! 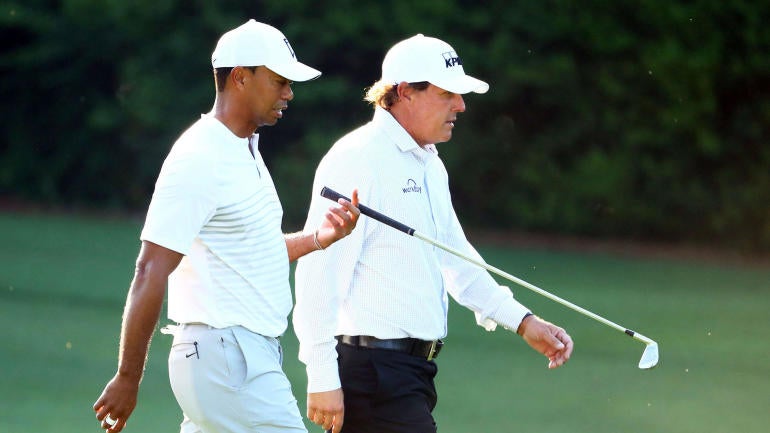 As revealed in early July, TIGER WOODS and PHIL MICKELSON have agreed to play a round of golf one-on-one for what has been reported as a $10 million winner-take-all purse!!!

Though the event has not yet been formally announced and, according to Greenberg, the date could either be Friday, Nov. 23 or Saturday, Nov. 24, the fact that they have settled on a location and weekend means the match is clearly more than just a pipe dream.
Woods, 42, has thrilled golf fans in his return to action this season, recently placing T6 at the 2018 Open Championship, his first top 10 at a major since 2013. He has won the WGC-Bridgestone Invitational eight times, so all eyes will be on Woods this week to compete against a loaded field.
Mickelson, 48, won the WGC-Mexico Championship in March, marking his first PGA Tour win in five years. A prestigious U.S. Open championship and the career grand slam still elude Lefty, who is not showing any signs of slowing down the amount of tournaments he plays each year.
The two star golfers have had a contentious relationship during their careers, though they have been brought together recently due to a variety of factors including on-course struggles and appearances representing the United States at the Ryder Cup. Mickelson is expected to play in his 12th consecutive Ryder Cup this year, while Woods has already been named a vice captain and hopes to receive an at-large selection from captain Jim Furyk.
GREENY and the GET UP CREW chop it up and break it down.

‪The fans’ support today, and all week, was amazing. Thanks for making my return to links golf something I’ll never forget. ‬
A post shared by Tiger Woods (@tigerwoods) on Jul 22, 2018 at 2:23pm PDT