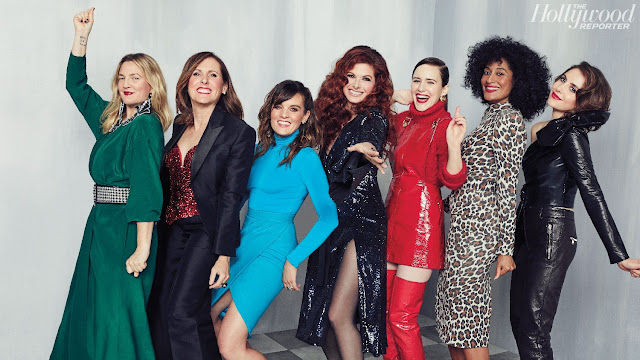 What's the most amusing or frustrating feedback you've received when trying out for a part?
TRACEE ELLIS ROSS I had a casting director say I need to work on my girls, as they [her breasts] were referred to, because they were too low, which is where God put them, so I think they're in a really good spot. (Laughs.) But she called down the hall for one of her assistants to bring another bra …
ALISON BRIE During an audition?
ROSS Yes, ma'am.
DREW BARRYMORE Oh no.
ROSS Yes, ma'am. (Laughter.) She was like, "Does anyone have on a 34B?" They come down, and it was a 32 something or other, and I was like, "That's not gonna fit." She was like, "They'll spill out, it'll be great."
FRANKIE SHAW One time I was in an audition for House of Lies, and the casting director said I needed to show more skin. She actually took the shirt off her back and gave me her tank top. I still didn't get the part.
MOLLY SHANNON I remember going to an audition when I was first starting out, and I bumped into another girl auditioning who, right before I went in, was like, "Oh, my God, have you gained, like, a hundred pounds?"
RACHEL BROSNAHAN No!
BARRYMORE That happened to me recently. I'd gained a bunch of weight, and I was in a restaurant, and a woman goes, "God, you have so many kids." And I was like, "Well, two." And she goes, "And obviously one on the way." I looked at her and, for the first time in my life, I go, "No, I'm just f*ck*ng fat." (Everyone claps.)
Whether we label this the #MeToo era or the Time's Up era, how have your world and your perspective changed as a result?
ROSS For me, the conversation and the narrative are exactly the same, the thing that's changed is the connection and the relationship with other women. There is a camaraderie now. If the Golden Globes is one weird example, that red carpet experience was especially different. It wasn't about, like, (her voice rises several octaves) "Oh, I don't want to share [what dress I'm wearing] because she might want to wear it." No, there was a real …
MESSING Purpose.
ROSS Right, and we switched the power relationship on that carpet, we were there as a collective force.
HAW There has also been a collective release of shame.
ALL Mmm-hmm.
BRIE These conversations used to happen in tiny rooms just with your best girlfriend of like, "I don't think this is OK."
ROSS With a little shame involved.
BRIE Totally. "Maybe I read it wrong?"
BARRYMORE I was always a producer. And before that, I was a kid, and unless you were a pedophile you weren't messing with me and thank God no one was. But I was never an ingenue. And then when I started my production company, men never looked at me that way and I never had an issue because I was always working with them on their side. I think that dynamic saved me from a lot of situations.
Do the rest of you feel a responsibility to comment on what's going on in the world, whether it's through your shows or as actresses?
ROSS As a human being, I do. Not necessarily commenting on it but being an active participant and moving the needle in the direction that I think it needs to be going, whether that's through my work or on the platform that my work has offered me.
BARRYMORE And you have to have a big, daring spine in a show or you've lost the audience now. 1950s-style shows wouldn't work. We've just come too far, it's all been put out there and we can't go back to Leave It to Beaver. I mean, they could make a show called Leave It to Beaver today, but it would be very different. (Laughter.) But it's a tricky, slippery slope to put yourself out there. It's so hard to be right, and you're possibly wrong, and then you feel bad and you pull back, so I like doing it through my show.
SHAW Yeah, I have a much harder time exposing myself politically as me than I do through the show. And this show definitely would never have been able to exist in any other time. Our first season was essentially about sexual assault and sexual trauma. So I'm grateful that the tides are changing.
BRIE In the past, I've felt much more timid about expressing [my opinions]. I'd be like, "I'm just an actress working on a comedy show and like, I don't know, do I want to ostracize people who disagree?" But there are such glaring issues now.
ARRYMORE It's a business decision. I have other companies outside of film. I sell a lot [of beauty and fashion products] at Walmart, Amazon, Ulta, all these different companies, and I don't want to alienate people.