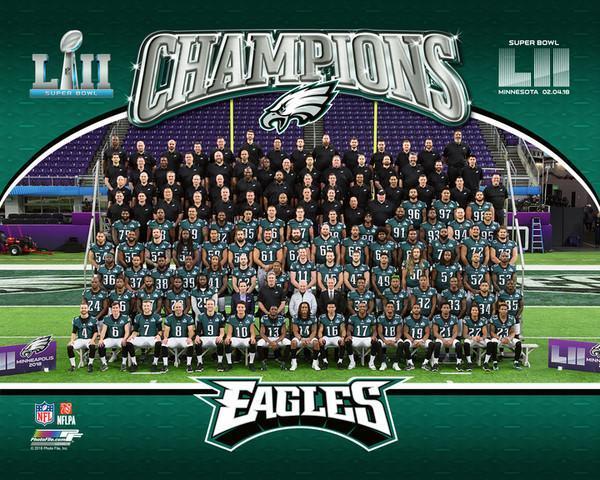 However; the SUPER BOWL LII Champion EAGLES did NOT make the traditional victory visit to Washington, DC, to visit the President of the United States at the White House.

In a statement, President TRUMP stated;


... the visit was cancelled because the players disagree "with their President because he insists that they proudly stand for the National Anthem, hand on heart, in honor of the great men and women of our military and the people of our country."


Instead; in his statement he stated that he White House would host A CELEBRATION Of AMERICA;


"one that will honor our great country, pay tribute to the heroes who fight to protect it, and loudly and proudly play the National Anthem."

The source said the players who did intend to travel to Washington were planning to do community events while in the capital, including visits to a school and community center. Those visits were canceled after the invitation to the White House was revoked, the NFL Players Association said in a statement Tuesday.


"It has been incredibly thrilling to celebrate our first Super Bowl Championship. Watching the entire Eagles community come together has been an inspiration. We are truly grateful for all of the support we have received and we are looking forward to continuing our preparations for the 2018 season."


"So many lies smh

Here are some facts

1. Not many people were going to go

2. No one refused to go simply because Trump “insists” folks stand for the anthem

3. The President continues to spread the false narrative that players are anti military pic.twitter.com/89GUNhJ4eE"

""There are a lot of people on the team that have plenty of different views. The men and women that wanted to go should've been able to go. It's a cowardly act to cancel the celebration because the majority of the people don't want to see you."

"I don't want to take away from anybody's experience or make it a big distraction. It's a celebratory event, and I want the guys who choose to go or whatever to enjoy that," Jenkins said in February. "Me personally, because it's not a meeting or a sit-down or anything like that, I'm just not interested in the photo op.

"Over the last two years, I've been meeting with legislators, both Republican and Democrat, it don't matter. If you want to meet to talk about events in my community, changing the country, I'm all for that. But this isn't one of those meetings, so I'll opt out of the photo opportunity."

"Fans all across the country rallied behind [the Eagles] because we like to root for the underdog and we feel joy when we see the underdogs finally win. I'm equally proud of the Eagles' activism off the field. These are players who stand up for the causes they believe in and who contribute in meaningful ways to their community. They represent the diversity of our nation -- a nation in which we are free to express our opinions."

The Philadelphia Eagles Football Team was invited to the White House. Unfortunately, only a small number of players decided to come, and we canceled the event. Staying in the Locker Room for the playing of our National Anthem is as disrespectful to our country as kneeling. Sorry!
— Donald J. Trump (@realDonaldTrump) June 5, 2018

So many lies smh
Here are some facts
1. Not many people were going to go
2. No one refused to go simply because Trump “insists” folks stand for the anthem
3. The President continues to spread the false narrative that players are anti military pic.twitter.com/89GUNhJ4eE
— Torrey Smith (@TorreySmithWR) June 4, 2018