30 years ago, Filmmaker SPIKE LEE lost at the 1978 CANNES FILM FESTIVAL with his film, DO THE RIGHT THING!!!

Currently, SPIKE is putting the finishing touches on his film, BLACKkKLANSMAN and preparing to present next week at the 2018 CANNES FILM FESTIVAL.

JORDAN PEELE is producer of the film.

SPIKE LEE on President DONALD TRUMP and his response to the 2017 CHARLOTTESVILLE TRAGEDY.

"I just think that his dog whistle stuff has given these people that 'Come out." They get the signal. That's what happened in Charlottesville. Agent Orange refused to repudiate the Klan, the alt-right and the Nazis. 'There's good people on both sides.' That's going to be on his gravestone. He's on the wrong side of history."

JORDAN PEELE on his response to the RON STALLWORTH memoir that inspires the movie, and; bringing SPIKE LEE on board with the film project:

"I was just blown away. I couldn't believe I had never heard about it. It's one of these pieces of reality that almost plays like social satire. So, I was immediately obsessed with this story."
"I thought about Malcolm X, Inside Man [and] 25th Hour, and Spike just has an ability to do tension right, to do the moments of levity right, to deliver a social message and a punch," Peele adds. "This is a unique film, and Spike has sort of forged a subgenre of his own that I just saw this fitting in."
JORDAN on the timing for the release of the film as it relates to CHARLOTTESVILLE:
"The timing for this couldn't be more urgent. The country just got this sobering reminder that groups like the KKK are still active and still dangerous and still hateful, and they're emboldened right now. That was [a] clear example of the president's ignorance and divisiveness. To suggest there are good people who are carrying Tiki torches screaming 'Jews will not replace us' and inciting violence was a really dark moment. Really sad."
SPIKE on casting for the roles:
"Get the best m@th*rf#ck!rs for the roles,"
IOHN DAVID WASHINGTON: On being cast for the role of RON STALLWORTH:
"I didn't even know he had my number. And he told me about this book, like, 'Sending it to you. Where are you?' I was like, 'I'm in Cincinnati shooting a movie. Old Man and the Gun.' 'All right, it'll be there tomorrow. Read it. Click,"
ADAM DRIVER on working with SPIKE LEE:
Spike is definitely in charge," says Driver. "But he is so collaborative and open, and you know exactly where he stands at all times. There's no ambiguity. There is no drama going on off-set that makes its way onto the screen."
RON STALLWORTE on JOHN DAVID WASHINGTON being cast to play him:'
"My first response was Denzel, even though I knew Denzel was too old," he notes. "I was 25 when this occurred, and Denzel is in his 60s. When it turned out to be his son who got the role, I chuckled at the irony."
SPIKE on people labelling it as a Cop-Buddy Comedy:
"Horrible. People still have a hard time understanding the difference between humor and comedy. I don't do comedy. No one is slipping on a banana peel [in my movies]. And you can have humorous moments dealing with very serious subject matter. Just because you have humor that will make people laugh does not mean that it's a comedy." 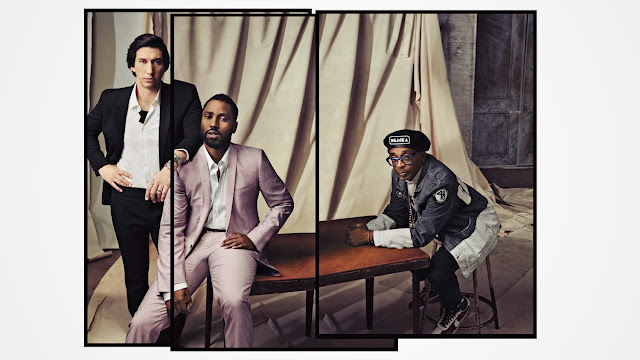