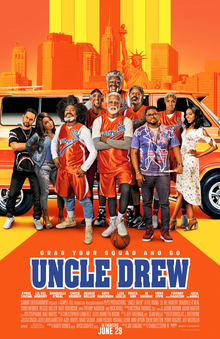 UNCLE DREW has his origins as a character created in 2012 for KYRIE IRVING during his tenure wit the CLEVELAND CAVALIERS for his PEPSI MAX campaign.

Film UNCLE DREW focuses on Dax (Lil Rel Howery) who convinces former basketball playground legend Uncle Drew (Kyrie Irving) to join a street ball tournament at the Rucker Park in Harlem after losing his basketball team to his rival Mookie (Nick Kroll). Uncle Drew agreed but as one of the conditions, he will have to form his own team. The two set out on a road trip to pick up Drew's old basketball squad.

Will YOU be going to see UNCLE DREW???


Check out the #UncleDrew final trailer on SportsCenter today! Don’t miss it.
A post shared by Kyrie Irving (@kyrieirving) on Apr 25, 2018 at 8:23am PDT

The Legend is ready to ball on the big screen. Get ready to watch #UncleDrew in theaters June 29! #JustDrewIt @UncleDrewFilm
A post shared by Kyrie Irving (@kyrieirving) on Feb 12, 2018 at 11:46am PST