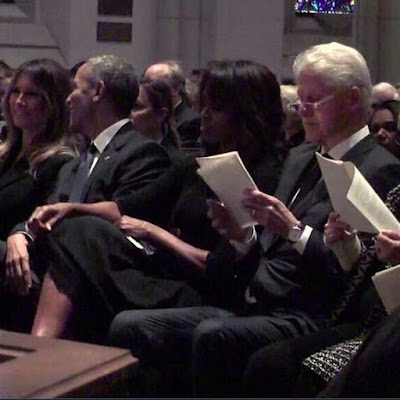 THESE are the photos of current First Lady MELANIA TRUMP and former President and First Lady BARACK and MICHELLE OBAMA at the Homegoing Celebration Service for former First Lady BARBARA PIERCE BUSH that literally obliterated the entire internet!!!

The service was held Saturday, April 21, at SAINT MARTIN'S EPISCOPAL CHURCH in HOUSTON, TX. Mrs. Bush was laid to rest at the GEORGE BUSH PRESIDENTIAL LIBRARY in AUSTIN, TX. 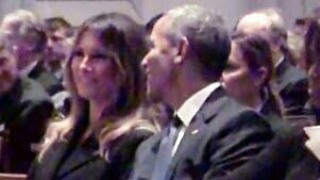 Notice FLOTUS #45 as she shares a lighthearted moment with POTUS #44 BARACK OBAMA during the service. Despite the solemnity of the occasion, she appears to genuinely be relaxed, at ease, and; enjoying the moment.

Regardless of ethnicity or nationality, Yours Truly CCG is NOT one to criticize the physical beauty of ANY woman, and; does NOT use the word UGLY to describe ANY woman's physical appearance.

That being said and understood; other than in these photos, Ya Boy CCG has not EVER seen MELANIA TRUMP appearing to be as beautiful as in these photos with President and First Lady OBAMA.

What would YOU imagine has First Lady #45 flashing that ear-to-ear smile?

Again; despite the occasion of #41 losing his wife and #43 losing his mother, EVERYONE in THIS photo seems to be pleased as punch that POTUS #45 is NOT in attendance. 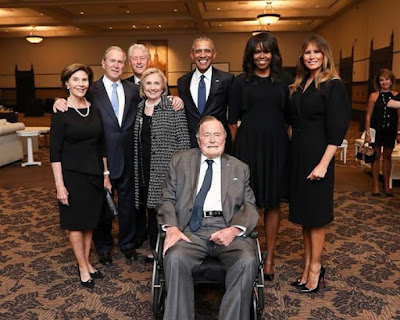