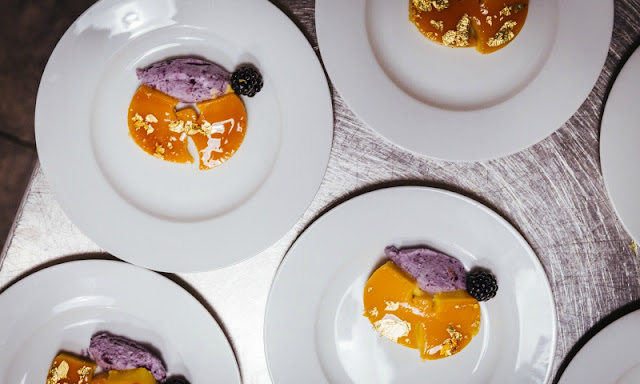 In 1993, WU-TANG CLAN debuted ENTER The WU-TANG: 36 CHAMBERS, and the genre of HIP HOP was forever changed!!!

That album is STILL considered among the greatest Hip Hop albums of all time, and; its influence remains to be felt in the  beats, rhythms, lyrics, samples, musical meter, and, even some of the names of artists of the current generation.

LOS ANGELES Magazine  reports now in 2018, enter ENTER The 36 COURSES - A WU-TANG CULINARY JOURNEY: The WU-TANG TRIBUTE DINNER SERIES an experience of art, food, and, music that began as a birthday dinner between friends and has expanded into a music-based pop-up dinner and brunch series dedicated to ALL things WU-TANG CLAN.

Each pop-up event features several dishes inspired by a WU-TANG song, album, or, member, and eventually culminates in a total of 36 courses.

Chef AC Boral and MC Vince Perez are the curators behind this creative culinary concert. Upon arrival. diners are served a KILLER BEEZ Cocktail (photo above).

Part One of the series includes four courses. A cheddar-brie waffle and tomato jus. Course #2 - PROTECT Ya NECK (photo above)

Hand-cut fries, roasted pork belly, and a spicy vegan chipotle gravy (Because RZA is vegan and a few other members of the crew are vegetarian, this dish can be made without pork). Before each dish is served, MC Vince Perez performs an original rap verse pairing the food to be served with the music or Wu-Tang member by whom the dish was inspired.

To add to the sensory overload, Artist JOHN McNICHOL displays his original art and gives a commemorative art piece to every diner.

Enter The 36 Courses at ENTER The 36 COURSES.

@gruniongazette came through to cover our last sold out WU culinary experience. Scope the exclusive art & WU inspired food with rhyme pairings! We're back at it again Sat April 28! Grab a ticket before it sells out! Link in bio 👐🏿👐🏼👐🏻 #WuWednesday #WuTang #WuTangClan #wutangisforthechildren
A post shared by WU-TANG IS FOREVER (@enterthe36courses) on Mar 28, 2018 at 12:54pm PDT