TIGER WOODS Is BACK On ESPN MAG!!! 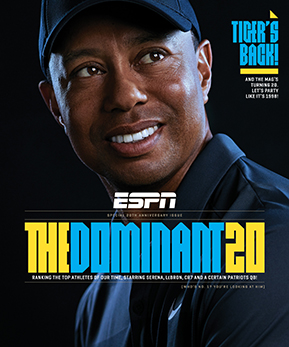 TIGER WATCH 2018 continues as G.O.A.T. Golfer TIGER WOODS is the cover story for THE DOMINANT 20 ISSUE of ESPN Magazine!!!


Question from Marty Smith: What did it mean to you to learn that ESPN The Magazine named you the most dominant athlete of the past 20 years?
Answer from Tiger Woods: That means that I'm old. That means I've been doing it a long time. I've done it well for a long time. But also, I've been around for a long time.
Smith: What made you so unstoppable for so long?
Woods: I just wanted to beat you.
Smith: It can't be that simple.
Woods: It really is, it really is. When I compete, I get immersed in the competition of it, and I love not just to win, but I love to beat people. And I love to go head-to-head, eyeball to eyeball, let's see who flinches first. And that has kept me going, I think. Has it driven me sometimes too far? Yeah, it has. I've caused myself some bodily harm because of it. I have pushed my body beyond its limits. I wish I had a little more of a governor. But on the flip side of it, I don't think I would have won by the margins that I've been able to win by.
Smith: I love to have conversations with great athletes, coaches about the impact of their dads. And yours is well-documented. What are your sweetest memories of your dad?
Woods: One of my favorite times was when we used to go back on ... it used to be called the Old Back Nine. It was part of the original 18 holes at the Navy golf course I played in Long Beach, and so we would go to the Old Back Nine and go way off in the corner and we would just hit balls late in the evening. And he would be working on his game and I would be working on mine. And there would be no talking, because the true litmus test is going to be Saturday and Sunday, who was going to beat who. And he has to get ready to beat his little son, and I was getting ready to, you know, kick my dad's butt.
Smith: I know Rory McIlroy is a buddy of yours. What defines true friendship for you?
Woods: I can trust them with anything. I can tell them just about anything and it never leaves that person.
Smith: How many friends you got?
Woods: About a handful.
Smith: How has fatherhood affected your worldview?
Woods: It's changed it dramatically. You know, my off time used to be spent playing golf, thinking about golf. When I just had my kids, I didn't really do that as much. They are the most important things in my life, and so I do anything and everything I possibly can to help them and guide them and teach them. Golf took a back seat to that. But, more importantly, my health has been the No. 1 thing that's guided me, because I want to be healthy for my kids. I couldn't play with them anymore. It really sucked to not be able to play soccer with them, throw a ball around, lay on the floor, play LEGOs, do all of those things that every other parent gets to do. But I just couldn't do it. My back was so bad.
Smith: Starting out for you, it was win, win, win, domination, domination, domination. What about now?
Woods: The evolution of feeling, how it feels to win, hasn't changed -- the gratification that I feel when it's done. But the process that I went through has changed because, you know, I've gone through different swings. I've gone through different injuries. I've gone through different things. But, ultimately, if I'm holding the trophy, no one else is.
-CCG

‪“Over the last 21 years, my foundation has grown to be bigger than just me, and today I'm excited to announce the new name, TGR Foundation, to reflect that. @tgrfound has just scratched the surface and I look forward to the next stage of our journey”‬
A post shared by Tiger Woods (@tigerwoods) on Feb 13, 2018 at 10:32am PST

‪Proud to launch new sites for TGR, Tiger Woods Ventures. Check out what we're doing on and off the course. Link in bio.
A post shared by Tiger Woods (@tigerwoods) on May 5, 2017 at 11:44am PDT