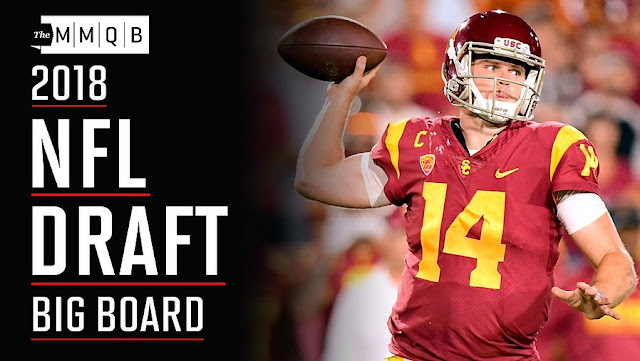 After analyzing all of the data from this weekend's 2018 NFL DRAFT SCOUTING COMBINE here is your official CCG FIRST TEN And FINAL TEN from the SPORTS ILLUSTRATED - 2018 TOP 100 NFL DRAFT PROSPECTS:

Height: 6' 0" | Weight: 233 pounds
Evaluators told our Albert Breer that Barkley is a better prospect than Ezekiel Elliott wastwo years ago, and one team told Peter King that Barkley was the fifth prospect in the past 20 years to have received a perfect grade from them. Barkley is a true workhorse back who would be a first-round prospect solely on his ability as a runner. Add in his passing-game skills—think Le’Veon Bell, a big back who has the ability to create separation when lined up as a receiver—and he’s custom-built for the modern NFL.

That was fun. Thanks Trojan fam for all the continued support #fighton ✌🏼️
A post shared by Sam Darnold (@samdarnold) on Jan 3, 2017 at 11:15am PST

2. SAM DARNOLD, QB, USC
Height: 6' 33⁄8" | Weight: 221 pounds
He had some growing pains in his first full year as a starter—he saw a lot of new looks from opposing defenses and took some time to adjust, turning the ball over far too frequently. That, combined with mechanical corrections needed for a loopy delivery, could result in a redshirt year in 2018. But few doubt Darnold’s ability to learn at the next level, and his physical skills (strong-armed and accurate), mental makeup and ability to make plays late in the down give him franchise QB potential.


3. BRADLEY CHUBB, EDGE, N.C. STATE
Height: 6' 43⁄8" | Weight: 269 pounds
He can’t match Myles Garrett from an athleticism standpoint, but Chubb combines impressive get-off, an advanced approach to the pass rush and a relentless motor. A strip-sack savant, he’s also athletic enough to make the move to outside linebacker in a 3-4 defense and hold up in space.

4. QUENTON NELSON, G, NOTRE DAME
Height: 6' 5" | Weight: 325 pounds
The complete package at guard—one evaluator told Albert Breer that Nelson is a better prospect than Zack Martin was coming out of Notre Dame. Nelson is a violent mauler with brute strength and a nasty disposition, but blends it with nimble athleticism that allows him to thrive in space and as a pass protector.

Height: 6' 47⁄8" | Weight: 237 pounds
Think of him as a younger, extreme version of Cam Newton, the good and the bad—a pure power thrower who can attempt passes others can’t (and often from absurd platforms), but accuracy that’s streaky on good days and unacceptable on bad days. (Allen also has value on designed runs, though probably not to the same extent Newton does.) Accuracy problems are difficult to fix but not impossible to refine; his next position coach can start with often atrocious footwork, and comfort with a more talented group of pass-catchers should lead to more confidence. He’s every bit the boom-or-bust prospect everyone thinks he is, and the rare arm talent gives him the highest ceiling in this draft class.

Height: 6' 01⁄8" | Weight: 204 pounds
As more NFL offenses turn to versatile, movable chess piece types to gain the upper hand, Fitzpatrick provides the antidote. He’s a rangy and instinctive in centerfield, but is at his best coming down to match up with athletic tight ends and slot receivers. He excels as a blitzer, attacks as a run defender, and has the character and football IQ immediately become a leader in the locker room.

Height: 6' 05⁄8" | Weight: 215 pounds
There’s a reason few 6-foot quarterbacks make it in the NFL, and the fact that Mayfield is coming from an Air Raid offense (supported by superior talent) is a second strike. Still, he was adept at finding throwing lanes at the collegiate level. He’s an anticipatory passer, which will make up for what’s ordinary arm strength for an NFL starter. And the Johnny Manziel comparisons should probably go away considering Mayfield’s off-the-charts football character, as well as high football IQ. An offensive coordinator might have to get a bit creative (and you wonder how Mayfield will handle a more aggressive media throng at the NFL level if the likes of Lee Corso can get under his skin), but with a strong interior line in a timing-based offense, there’s no reason Mayfield can’t have success in the NFL. (By the way, we have Robert Klemko tailing Mayfield throughout draft season.)


8. JOSH ROSEN, QB, UCLA
Height: 6' 4" | Weight: 226 pounds
A pure passer with advanced feel in the pocket and impeccable ball placement, Rosen is probably the most pro-ready of the QBs in this year’s class. He won’t make plays late in the down like Sam Darnold does though, and durability is a question mark. He also has the kind of beat-of-a-different-drum personality (hit the Independent Thought Alarm) that will surely cause some evaluators to bristle.

Height: 5' 107⁄8" | Weight: 183 pounds
Ward’s competitiveness and leaping ability allow him to play bigger than his size, and his loose hips and quick feet allow him to mirror quicker receivers underneath. He’ll likely always have issues against big No. 1 receivers, but can play the slot or outside and has Pro Bowl potential.

10. ROQUAN SMITH, STACK LB, GEORGIA
Height: 6' 07⁄8" | Weight: 236 pounds
He’s undersized, but Smith is also fast and instinctive (which allows him to play even faster). He’ll need to be covered up by a big defensive line, but brings star potential as a 4-3 WILL or 3-4 ILB.


90. CHAD THOMAS, EDGE, MIAMI (FLA.)
Height: 6' 5" | Weight: 281 pounds
He’s one of the most impressive size/athleticism prospects in this class, but the production was never there at Miami. He’s a project, but has the kind of ceiling most edge players in this draft class can’t match.

91. RASHAAN GAULDEN, CB, TENNESSEE
Height: 6' 03⁄4" | Weight: 197 pounds
Long speed is an issue (4.61 forty at the combine), but Gaulden brings a nice blend of size and twitch. He can cover the slot, making a ton of plays on the ball last season, and is extremely willing to step up as a run defender.


Truthfully, a month and a half ago I couldn’t tell you how my last game went, how the next one will go, or if I would even play anymore. Today, I stand on my two feet like a man. Let me be the example of what not to do, but also let me be the example of what to do. All I ever wanted was the opportunity, I always knew I could take care of everything else. Thank you to my teammates, coaches, parents, and peers for a memorable, emotional, and unbelievable night. 2017 been the most craze year; ran my best race. #TheRealMVP
A post shared by Jordan Lasley ✌🏾️ (@jlas2) on Dec 19, 2017 at 12:42am PST

92. JORDAN LASLEY, WR, UCLA
Height: 6' 1" | Weight: 203 pounds
A burner with an impressive ability to go 0-to-60 along with decent size, Lasley was one of the nation’s best big-play threats as a junior. He seems to have issues tracking downfield though, as he consistently lets the ball get into his body and has a tendency to make routine catches into difficult ones (or, often, drops). He will also need a closer look from a character standpoint after multiple suspensions, including a three-game ban for violating team rules last season.

93. JAMARCO JONES, OT, OHIO STATE
Height: 6' 4" | Weight: 299 pounds
Ohio State’s blindside protector the past two seasons, Jones’ long arms (351⁄8 inches) and above-average athleticism should allow him to stay at tackle in the NFL. He could hold his own as a serviceable starter.

94. TRE'QUAN SMITH, WR, UCF
Height: 6' 2" | Weight: 210 pounds
With a good combination of size and speed (4.49 forty) and a knack for creating late separation downfield, Smith has a chance to develop into a quality complementary deep threat and potential No. 2 receiver.


95. JAYLEN SAMUELS, RB/FB/TE, N.C. STATE
Height: 5' 111⁄2" | Weight: 225 pounds
A unique offensive weapon, Samuels lined up as a tight end, receiver, H-back, tailback and fullback for the Wolfpack. He’s a handful for linebackers in the passing game and a crafty runner between the tackles. The question is whether he measures up athletically—he does a little bit of everything, but can he do it at a high enough level?


96. ANTHONY MILLER, WR, MEMPHIS
Height: 5' 111⁄8" | Weight: 201 pounds
A steady if unspectacular prospect, Miller was highly productive as Riley Ferguson’s go-to receiver at Memphis. A bit undersized and lacking the speed to be a true deep threat, he’ll likely be a better fit in the slot due to his quickness and competitiveness working in traffic. He’s battled drops in the past, but if that’s cleaned up he should become a quality complementary receiver.


97. SIMMIE COBBS JR., WR, INDIANA
Height: 6' 31⁄8" | Weight: 220 pounds
A big-bodied contested-catch specialist, Cobbs is a one-speed mover with some holes in his game—he won’t be for everyone. But he had his moments against Ohio State in an early-season matchup last year, and shows the downfield ball-tracking, strong hands and nuanced play (no receiver in the nation was better at keeping his hands down until the absolute last moment—there were no tells for a defender with his back to the ball) to potentially become a starter in the NFL.

I guess you can say I'm eating good 😎😌💯 #AgainstAllOdds shout out @collegefootballedits
A post shared by shaquem_griffin (@shaquem_griffin) on Jan 1, 2018 at 9:25pm PST


98. SHAQUEM GRIFFIN, LB/DB, UCF
Height: 6' 03⁄8" | Weight: 227 pounds
You probably know the inspirational story by now: His left hand was amputated at age 4 but it didn't keep him from becoming a football star. The lack of a left hand poses some potential issues on the field (blocking as a special teamer and securing the ball on interceptions—though Griffin did have two career picks at UCF). But as you also know if you saw him at UCF, where he was the AAC’s defensive player of the year as a senior, Griffin has the athleticism and football character to make up for it. He might be something of a tweener, but his speed could allow him to thrive as a sub-package linebacker—capable of matching up with tight ends or covering ground as a free defender, with plus ability as a blitzer—as well as a core special teamer.

Height: 6' 5" | Weight: 309 pounds
He has prototypical length and athleticism for the NFL (as he showed at the combine), but despite the physical gifts Noteboom was far from dominant at the collegiate level. He’s an intriguing developmental prospect, but has to prove he’s capable of handling NFL-caliber power.

100. NICK NELSON, CB, WISCONSIN
Height: 5' 105⁄8" | Weight: 200 pounds
The Hawaii transfer was an immediate star in Madison. Nelson has very good feet and the quickness to mirror underneath, and he has the requisite size and recovery speed to play outside as well as inside. At this point he’s far too handsy, especially downfield, and could draw a ton of flags under NFL rules. He also, somehow, had zero interceptions despite 42 passes defensed in his collegiate career, so ball skills are a question mark.