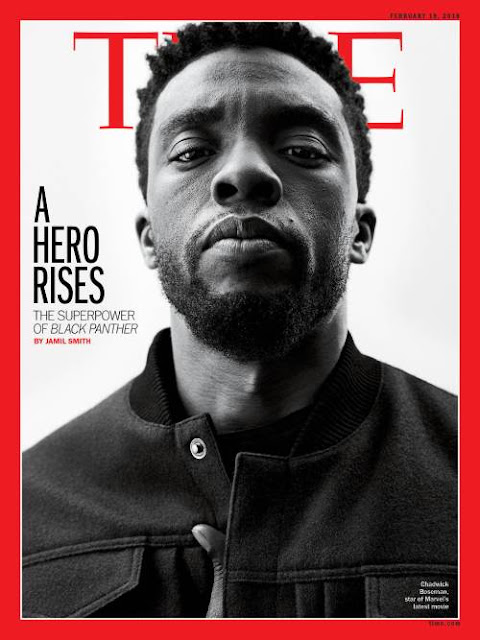 RYAN COOGLER is the 31-year-old visionary director behind this film.

CHADWICK and RYAN discuss The REVOLUTIONARY POWER Of BLACK PANTHER for the current copy of TIME Magazine.


The first movie I remember seeing in a theater had a black hero. Lando Calrissian, played by Billy Dee Williams, didn’t have any superpowers, but he ran his own city. That movie, the 1980 Star Warssequel The Empire Strikes Back, introduced Calrissian as a complicated human being who still did the right thing. That’s one reason I grew up knowing I could be the same.
If you are reading this and you are white, seeing people who look like you in mass media probably isn’t something you think about often. Every day, the culture reflects not only you but nearly infinite versions of you—executives, poets, garbage collectors, soldiers, nurses and so on. The world shows you that your possibilities are boundless. Now, after a brief respite, you again have a President.
Those of us who are not white have considerably more trouble not only finding representation of ourselves in mass media and other arenas of public life, but also finding representation that indicates that our humanity is multi­faceted. Relating to characters onscreen is necessary not merely for us to feel seen and understood, but also for others who need to see and understand us. When it doesn’t happen, we are all the poorer for it.
This is one of the many reasons Black Panther is significant.
RYAN COOGLER on BLACK PATHER exploring issues of identity;

That’s something I’ve always struggled with as a person. Like the first time that I found out I was black.” He’s talking less about an epidermal self-awareness than about learning how white society views his black skin. “Not just identity, but names. ‘Who are you?’ is a question that comes up a lot in this film. T’Challa knows exactly who he is. The antagonist in this film has many names.”


CHADWICK BOSEMAN on the opportunity to develop a real sense of identity from the mythical country of WAKANDA;

“You might say that this African nation is fantasy. But to have the opportunity to pull from real ideas, real places and real African concepts, and put it inside of this idea of Wakanda—that’s a great opportunity to develop a sense of what that identity is, especially when you’re disconnected from it.”

CB on the character of ERIK KILLMONGER as played by MICHAEL B. JORDAN;

“What I love about this experience is that it could have been the idea of black exploitation: he’s gonna fight Klaue, he’s gonna go after the white man and that’s it—that’s the enemy.”


T'CHALLA and KILLMONGER actually are mirror-images of each other, only separated by when they each were born.

“What they don’t realize, s that the greatest conflict you will ever face will be the conflict with yourself.”

RC on T'CHALLA vs KILLMONGER;

“That’s who you want to see come out on top. But I’ll be damned if the villains ain’t cool too. They have to be able to stand up to the hero, and have you saying, ‘Man, I don’t know if the hero’s going to make it out of this.’”

CB on BP being both Inspirational and ASPIRATIONAL;

“I know people [in the entertainment industry] are going to see this and aspire to it,” Boseman says. “But this is also having people inside spaces—gatekeeper positions, people who can open doors and take that idea. How can this be done? How can we be represented in a way that is aspirational?”

"I will be in MS when this movie opens. I think I will buy out a theatre in an underserved community there to ensure that all our brown children can see themselves as a superhero. I will let you know where and when Mississippi. Stay tuned. #KingsAndQueensWillRise #BlackPantherMovie"


Wakanda Forever. #BlackPanther
A post shared by Chadwick Boseman (@chadwickboseman) on Nov 9, 2017 at 9:01am PST