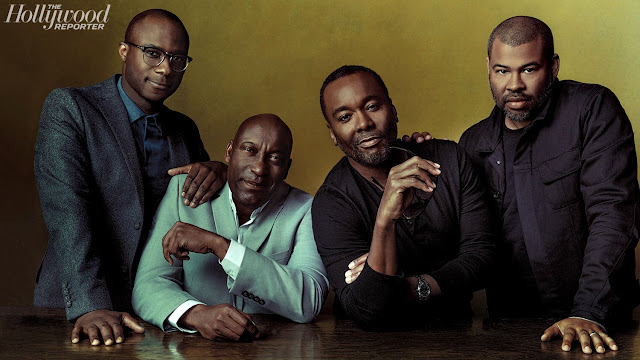 In the 90-year history of the ACADEMY AWARDS, only four BLACK PEOPLE have ever been nominated for the prestigious award of BEST DIRECTOR!!!

Hear from BARRY JENKINS, JOHNSINGLETON, JORDAN PEELE, and, LEE DANIELS, On RACE, POLITICS, And, HOLLYWOOD for The HOLLYWOOD REPORTER Magazine.


John, take us back to 1992. You’re 24 years old, and you’re at the Oscars as the first African-American best director nominee ever. You’re up against Jonathan Demme, Ridley Scott, Oliver Stone ... what do you remember?
SINGLETON Well, first of all, I’m f*ckin’ scared. (Laughs.)
Why is that?
SINGLETON Because I thought it meant my career was over. I thought, “That’s their way to get me out.” I was really very humbled by it, too. I was a year out of film school when it happened, and I just sat down and tried to write and study film even more than I already had so I was up to that honor. At the same time, as a black man in America, my other fear was not wanting to necessarily lose myself in the hype of Hollywood.
Lee and Barry, can you empathize with that feeling of fear?
DANIELS For sure.
JENKINS Definitely. For me, I didn’t make Moonlight for the awards conversation, and when it ended up there, I was shocked the whole way. I kept waiting for the other shoe to drop. And then with how things ultimately went in the end [with the mistaken announcement that La La Land had won best picture], because of how loud it was and all of that other stuff, I’ve never been as distraught as I was at the Vanity Fair party after the Oscars.

Race, barriers and battling nerves: A candid conversation with Oscar's only 4 African-American directing nominees in 90 years. Link in profile. Photo: @austinhargrave
A post shared by Hollywood Reporter (@hollywoodreporter) on Feb 23, 2018 at 6:50am PST