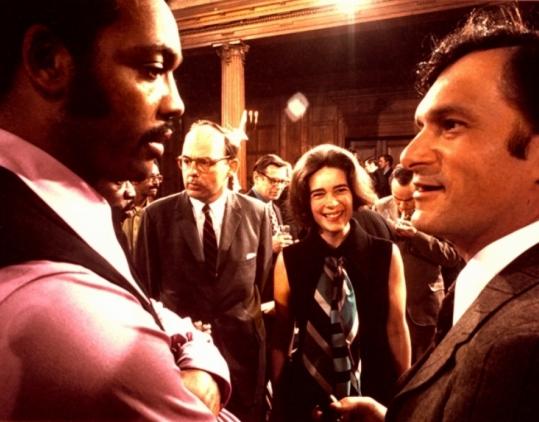 CIVIL RIGHTS Leader Rev. JESSE L. JACKSON Sr. has a contribution within the PLAYBOY Magazine: HUGH HEFNER SPECIAL TRIBUTE EDITION that describes HUGH HEFNER and how during the 1960s, the late iconic men's magazine founder demonstrated his commitment to the CIVIL RIGHTS MOVEMENT!!!


Light shining through a prism refracts at different angles with many colors. When Hugh Hefner’s light passed through the prism of my life, what I saw was a powerful ray of support for racial and social justice around the world. My view was from a civil rights angle, and to me, Hefner’s light was like a rainbow.

I first met the man called Hef in the 1960s in Chicago. I was a young civil rights organizer, assigned by the Reverend Dr. Martin Luther King Jr. to head Operation Breadbasket, the economic empowerment arm of the Southern Christian Leadership Conference. The nation was just then slowly emerging from the deep darkness of segregation. But the meanness of racism wasn’t confined to the South. To this day, Chicago is one of the most segregated big cities in America.

Many whites, whether dressed in pinstripes or sheets, were hostile to the freedom movement. Others were silent or painfully indifferent.

Hefner was none of those things. He was outspoken, a proud liberal voice—and playboy was a megaphone that reached millions long before social media.

And when we were being beaten in the streets by the police, Hefner fended off blows too in Chicago’s Grant Park during the Democratic National Convention in 1968. Those of us who know his tremendous contributions to justice and peace at home and abroad will be forever grateful.

In 1969, PLAYBOY published his last essay - A TESTAMENT Of HOPE.

In A TESTAMENT Of HOPE, Dr. KING wrote;

"Justice for black people will not flow into society merely from court decisions nor from fountains of political oratory,” King wrote. “Nor will a few token changes quell all the tempestuous yearnings of millions of disadvantaged black people. White America must recognize that justice for black people cannot be achieved without radical changes in the structure of our society. The comfortable, the entrenched, the privileged cannot continue to tremble at the prospect of change in the status quo.”

In a 1969 interview with PLAYBOY, Rev. JACKSON said about KING;

“taught us that even if the police—the law—say you can’t sit down, sit down anyway. In most communities until then, there weren’t five men who had that kind of courage. He challenged us to stand up to the police we used to run from. In Montgomery, Alabama, the cradle of the Confederacy, he rose up and declared that black men deserve their full rights of manhood. There wasn’t enough money to buy him, and there weren’t enough jails to hold him. Death itself isn’t enough to stop black men from being free, for crucifixion leads to resurrection.”

Hefner brought people together from all walks of life to talk and to learn from each other. He did so much to illuminate the darkness. In that long season of turmoil and change, he was a bright light.