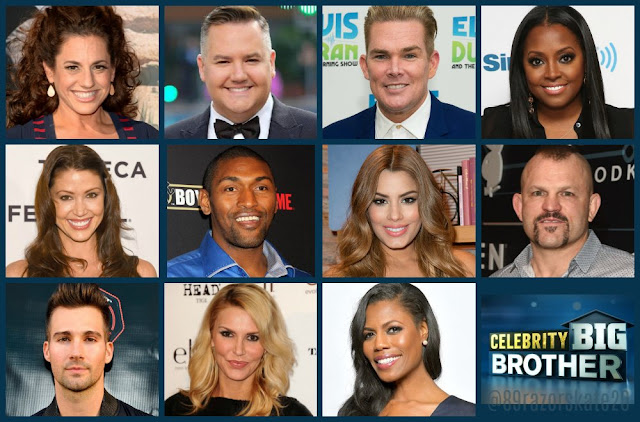 CBS has revealed the cast of their newest RealiTV series, CELEBRITY BIG BROTHER!!!

The three-time Apprentice contestant and Trump campaigner departed the White House for the Big Brother house. No word on if that is trading up or trading down.
Mark McGrathThe Sugar Ray singer also did a stint on Celebrity Apprentice. He’s actually been on many a reality television program, including Celebrity Wife Swap, a guest judge on American Idol, and host of not one but TWO Pussycat Dolls shows.
Shannon ElizabethThe American Pie star may not like living on slop if she becomes a “Have Not.” She also appeared on Dancing with the Stars, because of course she did.
Metta World PeaceThe former Ron Artest won NBA Defensive Player of the Year honors as well as an NBA title. He’s also best known for the “Malice at the Palace” brawl between fans and players in Detroit while a member of the Indiana Pacers. Not that there’s ever any fighting on Big Brother. Oh, yeah, he also did his time on Dancing with the Stars.
Brandi GlanvilleIt wouldn’t be a celebrity reality show without a Real Housewife. This time, it’s Brandi from Beverly Hills, who also paid her dues on Celebrity Apprentice. (Who didn’t?)
James MaslowThe Big Time Rush star also got fourth place on season 18 of Dancing with the Stars.
Keshia Knight PulliamRudy Huxtable is in the house! The Big Brother house, to be exact. She also appeared on, yes, Celebrity Apprentice.
Marissa Jaret WinokurThe Hairspray Broadway star was on the same season of Dancing with the Stars as her new housemate Shannon Elizabeth. Instant alliance?
Ariadna GutierrezShe was Miss Universe in 2015… for about two minutes. Then it was revealed that host Steve Harvey had read the wrong name. Whoops!
Chuck LiddellThe former mixed martial artist will have to use his smarts and social skills, not his fists to win this competition. And if you were wondering which show he previously appeared on: Celebrity Apprentice or Dancing with the Stars, it was the latter.
Ross MathewsThe former Tonight Show intern is a judge on RuPaul’s Drag Race. But now he will be judged by his fellow housemates… and America.

Will YOU be watching CELEBRITY BIG BROTHER???