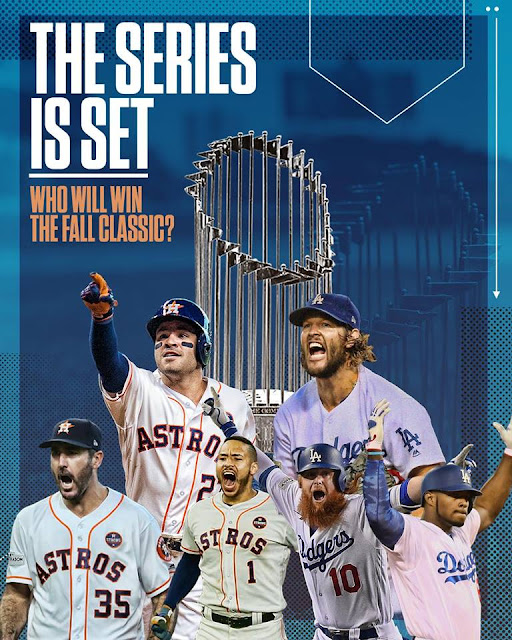 Tonight at DODGER STADIUM in LOS ANGELES, the 2017 MLB WORLD SERIES begins between the HOUSTON ASTROS and LOS ANGELES DODGERS!!!

Tonight's game begins at 8:00 PM EST, and; the entire 2017 WORLD SERIES will be broadcast LIVE on FOX.

If YOU are in need of assistance with your prognosticating, ESPN MAG 2017 WORLD SERIES PREDICTIONS: WINNER; NUMBER Of GAMES - MVP:


Dave, why are you picking the Dodgers to win the series?
The Dodgers enter the series rested and ready and playing the same excellent baseball they played most of the summer. Manager Dave Roberts always has a plan: not too deep with his starting pitchers and then give the ball to Kenta Maeda, Brandon Morrow and Kenley Jansen, who have combined to allowed five hits in 21⅓ innings in the postseason. That late-game trio gives them the edge over the Astros. -- David Schoenfield, ESPN senior writer
Sarah, you not only picked the Astros, but you also chose them in five. Why do you think Houston will get it done that quickly?
The Astros have momentum in their favor -- and I think it'll play a strong role. The Dodgers' pennant-clinching victory was convincing, but it happened a while ago. Since 2006, the World Series participant that clinched the pennant first has gone on to win the Fall Classic only once -- the 2008 Phillies. -- Sarah Langs, ESPN Stats & Information
Bradford, the Dodgers are the favorites according to our experts. What do you think gives them the edge in this series?
The Yankees showed in the ALCS that the Astros' dynamic offense can be pitched to. Houston is an elite contact-hitting team (in a 2017 context), but the Dodgers, especially when their relievers are on the mound, have combined terrific defense with soft contact from opponents. I'm also concerned about the collective workload of the Houston pitching staff because the Astros have played three more postseason games than L.A. As amazing as Justin Verlander has been, he enters the World Series with 230 innings pitched, including the playoffs. - Bradford Doolittle, ESPN staff writer
Sam, who are you picking to win it all?
These two great teams are so evenly matched that I'm not confident the difference between them would show up in a best-of-163-game series, let alone best of seven. Given the benefits of home field and the extra days of rest and rotation-setting, the Dodgers start with small edges. By the time the Series goes back to Houston, those edges might well have flipped. - Sam Miller, ESPN Senior Writer
Tim, you're one of two people to pick Yasiel Puig as the series MVP. Why is he your pick?
Puig will be the World Series MVP because the sheer volume of his contributions will be impossible to ignore. He will do something, maybe several somethings, to enrage just about everyone over the course of the series, but he will also save several runs with his glove and his arm. He will continue his yearlong penchant for big hits late in games, and he will demand attention because, whether you find him endearing or enraging, the camera is the one thing that loves him unconditionally. -- Tim Keown, ESPN senior writer