The MADNESS Of DONALD TRUMP On ROLLING STONE MAG!!! 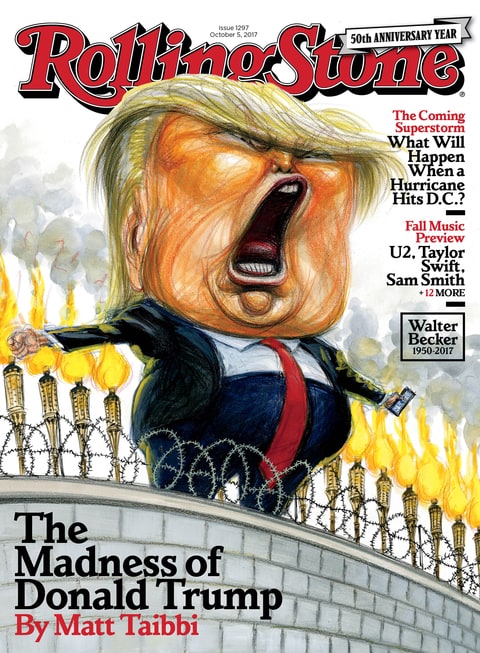 Evening, August 22nd, 2017, at a convention center in PHOENIX was the DONALD JOHN TRUMP COMING-OUT-As-INSANE PARTY!!!

It looks like the same old Trump up there on the stage: same boxy blue suit, same obligatory flag pin and tangerine combover, same too-long reddish power tie swinging below his belt line like a locker-room abomination. Earlier this year there were efforts to make Trump stop wearing his suit jackets open – designer Joseph Abboud said buttoning up was a "very visible way of showing he knows how serious the job is" – but Donald Trump doesn't take advice, not even the gently benign kind.

He said monstrous things and lied with stunning disinhibition, and when the civilized world recoiled in horror, he seemed to take sadistic pleasure in every minute – win or lose, the run was pure glory for him, a Sherman's March of taboo politics and testosterone fury that would leave a mark on America forever.
There was one more thing. Candidate Trump may have been crazy, but it was craziness that on some level was working. Even at his lowest and most irrational moments – like his lunatic assault on the family of fallen soldier Humayun Khan, in which he raved to the grieving Gold Star parents about how it was he, Trump, who had "made a lot of sacrifices" – you could argue, if you squinted really hard, that it was strategy, a kick to the base.
Or even if he wasn't doing these things on purpose, he must have been able to feel their impact, as the revolutionary force of his campaign demolished the 160-year-old Republican Party and barreled toward the gates of Barack Obama's White House.
Now, it's different. Now, he just seems crazy. And it's his own administration that is crumbling, not any system.
After a disastrous and terrifying August, which among other things saw him defend the "very fine people" among neo-Nazi protesters in a Charlottesville, Virginia, march, it's Trump's mental state – not his alleged Russia ties, nor his failure to staff the government or pass any major legislation – that has become the central problem of his presidency.
Is this man losing his mind? And if so, what can be done about it? We've had some real zeros in the White House before, but we've never had a chief executive who barked at the moon or saw ghosts – at least, not one who was so public about it.


We deserve Trump, though. God, do we deserve him. We Americans have some good qualities, too, don't get me wrong. But we're also a bloodthirsty Mr. Hyde nation that subsists on massacres and slave labor and leaves victims half-alive and crawling over deserts and jungles, while we sit stuffing ourselves on couches and blathering about our "American exceptionalism." We dumped 20 million gallons of toxic herbicide on Vietnam from the air, just to make the shooting easier without all those trees, an insane plan to win "hearts and minds" that has left about a million still disabled from defects and disease – including about 100,000 children, even decades later, little kids with misshapen heads, webbed hands and fused eyelids writhing on cots, our real American legacy, well out of view, of course.
Nowadays we use flying robots and missiles to kill so many civilians and women and children in places like Mosul and Raqqa and Damadola, Pakistan, in our countless ongoing undeclared wars that the incidents scarcely make the news anymore. Our next innovation is "automation," AI-powered drones that can identify and shoot targets, so human beings don't have to pull triggers and feel bad anymore. If you want to look in our rearview, it's lynchings and race war and genocide all the way back, from Hispaniola to Jolo Island in the Philippines to Mendocino County, California, where we nearly wiped out the Yuki people once upon a time.
Trump wasn't always crazy. He wasn't even always obnoxious. Many Americans don't remember, but the Donald Trump who appeared on TV regularly in the Eighties and Nineties was often engaging, self-deprecating, spoke in complete sentences and (verbally, anyway) usually lived up to his expensive schooling. He'd say things like, "These are the only casinos in the United States that are so rated," and use words and phrases like "a somewhat impersonal life" and "money isn't a totally essential ingredient."
The difference today is striking. Trump has not only completely lost his sense of humor, particularly about himself, but he's a lingual mess. In his current dread of polysyllables – his favorite words include "I," "Trump," "very," "money" and "China" – he makes George W. Bush sound like Vladimir Nabokov. On the page, transcripts of his speaking appearances often look like complete gibberish.
The difference even since last year is hard to miss, and why not? The presidency severely ages and stresses even healthy people. From Obama to Bush to Jimmy Carter, presidents on their last day of office often look like med-school cadavers. President Trump already looks older, has a lower frustration threshold and seems only to have two moods, rage and sullen resignation (a.k.a. pre-rage).
This is the paradox of Trump. He is damaged, unwell and delusional, but at critical moments he's able to approximate a functioning human being just long enough to survive. He is the worst-case scenario: embarrassing, mentally disorganized and completely inappropriate, but perhaps not all the way insane. Maybe crimes will soon be discovered and he'll be impeached, or maybe he'll run naked down Pennsylvania Avenue this fall, or nuke someone, and be declared unfit. Until then, he's just the president we deserve, dragging our name down where it belongs. He is miserable, so are we, and we're stuck with each other.
KARMA really IS a B8TCH.
Buckle up for the ride with ROLLING STONE Journalist MATT TAIBBI for a glimpse into the ongoing American train wreck that is the resulting collateral damage from The MADNESS Of DONALD TRUMP.
-CCG 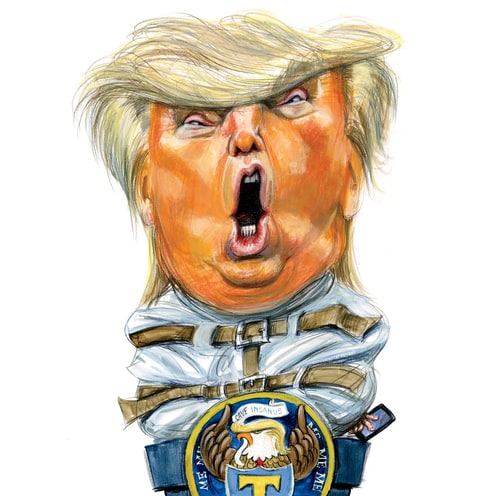