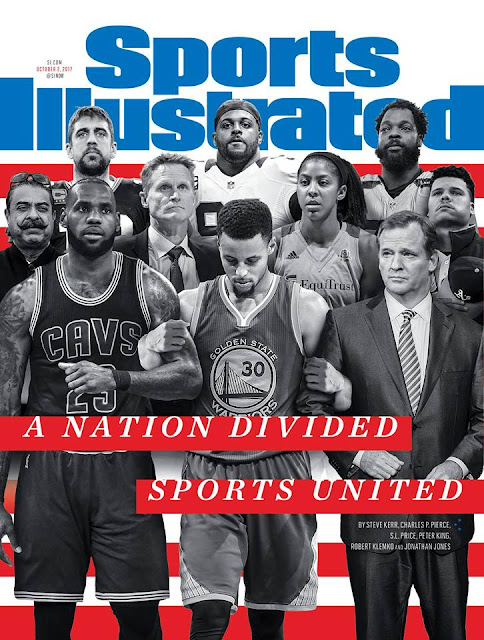 In case you missed it, Friday, September 22, President DONALD TRUMP was in ALABAMA speaking at a rally in support of incumbent REPUBLICAN Sen. LUTHER STRANGE who is in a runoff election on today!!!

During his presidential remarks, POTUS #45 made reference to the NFL Players who have been staging protests during the rendering of The STAR-SPANGLED BANNER.

“But do you know what’s hurting the game more than that? When people like yourselves turn on the television and you see those players taking the knee when they’re playing our great national anthem. The only thing you could do better is if you see it, even if it’s one player, leave the stadium. I guarantee things will stop. Things will stop. Just pick up and leave. Pick up and leave. Not the same game anymore, anyway.”


The social media response was to say the least... explosive!!!

Throughout the league, on Sunday, September 24, at least 200 NFL Players responded on the field by sitting or kneeling during the playing of the anthem.

At some games, the players were joined by Team coaches and Owners.

SPORTS ILLUSTRATED Journalist CHARLES P. PIERCE speaks on how the rendering of The NATIONAL ANTHEM prior to, or; during any time at a sports events, GREATLY POLITICIZES that event.

On Sept. 16, 1960, before a home game against the Athletics, Cleveland pitcher James (Mudcat) Grant was standing in the bullpen singing along with the national anthem. Grant decided to do a little barbering of the lyrics. He adjusted the last line to "This land is not so free/I can't go to Mississippi." This was some topical humor of a very high order: opposition to the civil rights movement was growing more violent, and, as had been the case since the Civil War, Mississippi was the cone of the volcano. Michael Schwerner was leading civil rights protests on the Lower East Side of Manhattan. Andrew Goodman was a classmate of Paul Simon's at Queens College in New York City. James Chaney was a star athlete in track and football at Harris Junior College and a budding civil rights activist. Medgar Evers was organizing boycotts in and around Jackson, Miss. Within four years, Grant would be traded to the Twins, and all four of those men would be murdered by the forces Grant sang about that September day.
The Indians' bullpen coach, a Texan named Ted Wilks, took exception to Grant's improvised lyrics and, according to Grant's account, called the pitcher a "black so and so." In reply, Grant told Wilks that Texas was worse than Russia. Grant then got dressed and left the park. The next day, Cleveland manager Jimmie Dykes suspended him for the season without pay. Wilks apologized but Grant refused to accept it. He would no longer accept that this racist invective was part of the cost of doing business as an African-American athlete in the U.S.
1) The inclusion of a national anthem—any national anthem—in a sporting event necessarily politicizes that event. Historically, this is best demonstrated by protests at the Olympic Games. Everyone remembers Tommie Smith and John Carlos in Mexico City in 1968. But few remember Czechoslovakian gymnast Vera Caslavska, who bowed her head and looked away from the Soviet flag while sharing the top spot on the medal podium with the U.S.S.R.'s Larisa Petrik at the same Games, only two months after Soviet tanks crushed the Prague Spring revolt of 1968. When Caslavska got home, she was investigated by the new government and forbidden to travel or compete for several years.
2) The protests of today are not about the anthem or the flag or the troops, or even about Donald Trump. The protestors are high-profile African-American athletes raising awareness of how lower-profile African-Americans are often mistreated by police officers.
3) All effective protest is inconvenient and, in its own way, uncivil. The Boston Tea Party was an act of vandalism. Critics' appeal to "find a better way to protest" is really a call for self-sabotage, and it's a dodge that dates back to the Olive Branch Petition of 1775.
4) The wealthy athletes protesting worked much harder for their money than the president in question ever has for his.
In short, if you're going to perform national anthems, you're going to have politics. And if you have politics, you're going to have political statements and, this being the United States of America, those statements are not always going to make everyone comfortable. And once military-related promotions reached a level that made even John McCain uncomfortable, those statements had to get louder, if only to be heard over the fighter jets, and more garish, if only to be seen beyond the giant midfield flags.
This is why, over the weekend, we had so many owners framing the issue as a matter of standing behind their employees' free-speech rights. The NFL power structure chose a relatively anodyne approach to the whole matter. It enabled the league to stay away from the issue that prompted the protests in the first place, the issue that very likely has kept Kaepernick from getting a job. Those same owners, along with commissioner Roger Goodell, don't want any part of the issue of why African-Americans end up dead on the pavement after traffic stops and other encounters with police officers. But ultimately the owners and commissioners may not have a choice: The real issue behind the protests has been out there all along.
Sunday, Sept. 24, was one of the oddest afternoons of fundamental Americanism that we've seen in an awfully long time, and it was directed by U.S. citizens against misbehaving institutions of their own government—specifically against the president, but also against that which Marvin Gaye called out as "trigger-happy policin'" in 1971 on an album that included backup vocals from Mel Farr and Lem Barney, two Detroit Lions who did not stick to sports. Make me wanna holler, indeed.
Pick up the ball on why CHARLES P. PIERCE says AMERICA ATHLETES Are NOT Going To STICK TO SPORTS And THAT IS An ADMIRABLY AMERICAN THING.
-CCG