FRENCH MONTANA was so impressed with, and; made such a connection with TGK, he flew the whole crew ( TGK + 3 adult chaperones) to LOS ANGELES to perform with him at the 2017 BET AWARDS.


To oversimplify it: did the streets raise you or did your mama raise you?Both. My mother raised me, but you know boys always grow closer to their mothers. My mother raised me, yes, but the streets really raised me when my father left.
When he abandoned you?
I wouldn’t say he abandoned me. I would say he moved due to certain circumstances. That he had no control over. I don’t think he abandoned me. I just think he couldn’t handle certain pressures. Being in the States, coming from Africa, which I get. It’s a culture shock, a lifestyle shock, it’s a money situation.
Do you hold any resentment towards him?
No, he’s still my father. And one of my best friends. I spoke to him a couple days ago. I called him on Ramadan, to check on him. He’s doing great. I’m going to see him [soon]. Yeah, me and my father have a great relationship.
What do you remember about growing up in Morocco?
I remember going to the beach. You know Morocco got like one of the biggest mosques in the world. So I remember when the mosque was built, we used to go to this little cliff and jump in the water. I remember moments like that. I also remember when a bike hit me and broke my leg.
You experienced poverty in North Africa and then again in the South Bronx, however different. What was that dichotomy like? Because there were lots of barriers—language, culture, class, social, economic, etc…
Yeah, definitely. I just think it was the perfect age for me. I’m glad I didn’t come any later, because I probably wouldn’t be who I am today. I know I wouldn’t be.
Are you a religious person? How do you treat your relationship with your higher being? It’s beautiful. Every night before I go to sleep I read two Surahs of the Quran. So I pray every night before I go to sleep. My relationship with Him is great. I just did Ramadan.
How was that?
Yeah, the Holy Month. I loved it.
When you do Ramadan, what do you get out of it, what intentions do you put behind it? I do it with God. I fast to get closer to Him. I think that God clean you up so he can come closer to you. He want to make sure you clean before He can talk to you.
What’s your relationship like with your mom?
She’s my everything. She’s my Earth. She sacrificed a lot when he left. She did not want us to go back. She didn’t know any English. She didn’t want her kids to go back to North Africa, because there’s no way in the world—it just goes to show you that with great sacrifices come great results. She sacrificed everything. She sacrificed her family, her brothers and sisters, anybody she ever knew, left her marriage for 20 something years—just for her kids.
Who is Karim as a father?
Right now, I’m not spending as much time as I’d like to with my son, due to my work. But I’m the best father. I’m the best father you can have. I also love what his mother is doing with him. Best schools, swimming classes, soccer classes, basketball. He’s a better version of me. I feel like I’m so happy, I’m at the point in my life where I can provide more opportunities for him than I had. Right now, he’s doing things I couldn’t even dream of doing at his age. God blessed me to have that for him.
What are your thoughts on the makings of “Unforgettable”, on what it took to get to Uganda and be in that environment?
You know, that’s why I do a 360 with everything. It’s why “Unforgettable” is so successful. Because we showed a world people put a blind eye too. It’s a whole different world, where people might be more talented than here… might strive harder for things they want than here. That’s where I got my hustling mentality from. It’s a Third World country and it’s beautiful.
Are there any stigmas that you want to debunk about Africa?
Nah. It’s beautiful how it is. All the riches and flaws. It is what it is, that’s the beauty of it. Like me landing there [Uganda], to a place that everybody told me not to go to, because of whatever mosquito epidemic and all these other variables—for me, knowing all of those things were a concern, it just goes to show that the flaws are the beauty of it.

French, what legacy do you want to leave behind?
The world is yours, and everything in it.
You’re not going to end this like this. You need to give me a response.
[Laughs] Love. That’s it. Love is the answer. And that’s going to be my legacy. Building bridges instead of gaps. That’s my legacy. Love. Love can open doors that would never open otherwise. 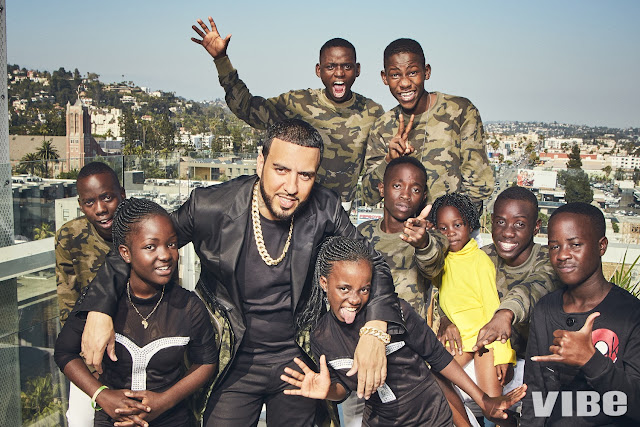 came to hand deliver my babies their plaque 🙌 5x platinum around the 🌎 @ghettokids_tfug @swaelee 🙏
A post shared by French Montana (@frenchmontana) on Aug 12, 2017 at 9:02pm PDT


Unforgettable wasn't just a record for me it was personal #JungleRules Love seeing these kids happy real #vibe
A post shared by French Montana (@frenchmontana) on Jul 14, 2017 at 2:53pm PDT