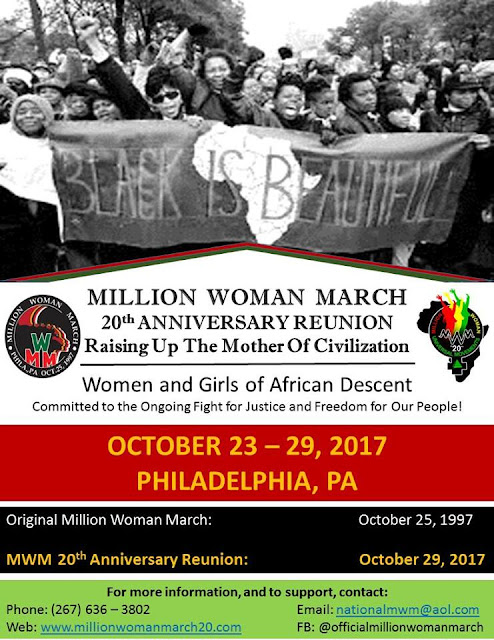 Sunday, October 29, BLACK WOMEN from throughout the USSA and across the diaspora will converge upon PHILADELPHIA, PA for the ORIGINAL MILLION WOMAN MARCH 20 YEAR ANNIVERSARY REUNION - #MWM20!!!

The MILLION WOMAN MARCH: #MWM20 was a protest march organized on October 25, 1997, on the BENJAMIN FRANKLIN PARK WAY in PHILADELPHIA, PA.


The march was founded and formulated by Phile Chionesu, a grassroots activist, human rights advocate, Black Nationalist/Freedom Fighter.
The march was envisioned and intended to help bring social, political, and economic development and power throughout the black communities of the United States, as well as to bring hope, empowerment, unity and sisterhood to women, men and children of African descent globally regardless of nationality, religion, or economic status. One main focus of the march for the women involved was family unity and what it means to be an African American woman in America. The women of the march called for three things: repentance for the pain of black women caused by one another, and the restoration and resurrection of African American family and community bonds.
The march started from the Liberty Bell and ended at the steps of the Philadelphia Art Museum.
Speakers at the event included Winnie Madikizela-Mandela, the ex-wife of Nelson Mandela; Congresswoman Maxine Waters; Sista Souljah; Jada Pinkett Smith; Attallah and Ilyasah Shabazz, the daughters of Malcolm X; and Dr. Dorothy Height. A message was read from Assata Shakur from her exile home of Cuba.
The march has been considered a social phenomenon due to its unconventional and unique way of organizing. It has influenced several mass gatherings by demonstrating a grassroots approach that had not been employed before. 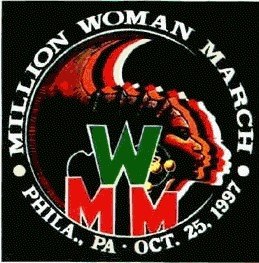 Get your Exclusive "Be Black and Mean It" Tee @ Millionwomanmarch20.com/shop
A post shared by OfficialMillionWomanMarchMWM20 (@officialmillionwomanmovement) on Sep 7, 2017 at 4:11pm PDT