WHERE ARE THEY NOW 2017 - VINCE YOUNG On SPORTS ILLUSTRATED MAG!!! 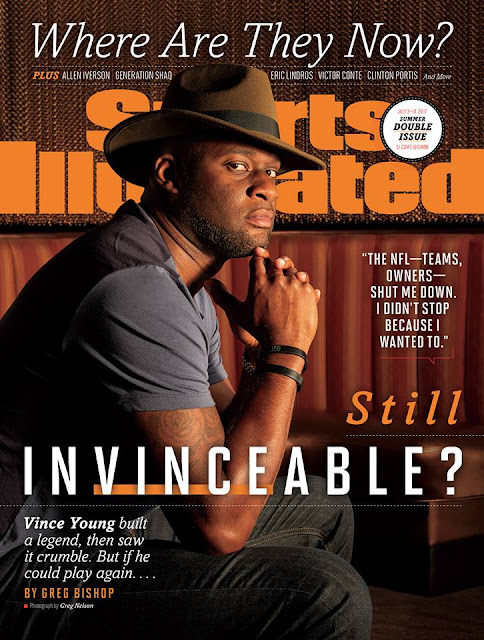 On him embarking upon this adventure with the CFL:

On the impact of what is now referred to as "The SUICIDE INCIDENT":

VINCE describes speaking with the Suicide Negotiator:
“He’s talking all slowly,” the QB recalls, “like: ‘Mr. Young . . . are you . . . O.K.? Do you . . . feel like . . . hurting yourself?’ ”
“I’m like, Dude, quit talking to me! And I’m looking at Fisher like, You can stop all this, all the suicidal talk. He’s sitting there, saying nothing. I feel like he was just laughing at that s---. The [TV] cameraman hiding in the woods—it all felt like a big setup. And now I gotta walk through the airport as the Suicidal Guy for the rest of my life.”
On Golfer TIGER WOODS' recent arrest for SUSPICION of DUI, which later turned out to be an adverse reaction to PRESCRIPTION PAINKILLERS:
“Tiger made a mistake,” he says. “How can anyone say they know what he’s going through? He’s probably f------ down [that] he can’t play golf. But [the media] wants to make an example out of him. Judges, lawyers, all kinds of people get DWIs.”
On having enjoyed his brief time with the SASKATCHEWAN ROUGHRIDERS:
“I was having a blast,” he says. “A lot of people don’t understand: The best part of sports is the camaraderie. I’m blessed I was able to be around those guys.”