WHERE ARE THEY NOW 2017 - ALLEN IVERSON On SPORTS ILLUSTRATED MAG!!! 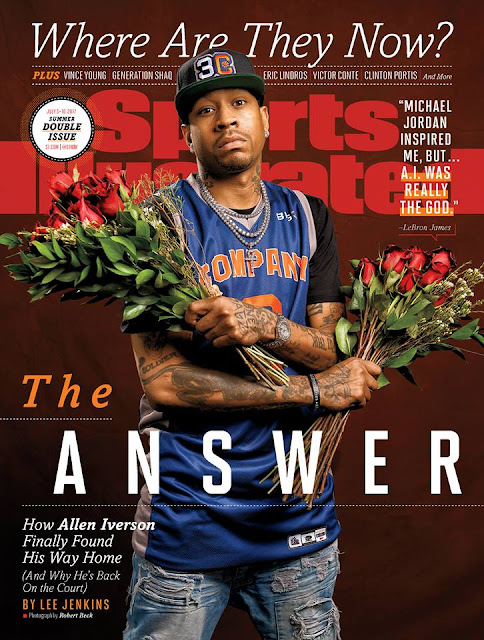 On post-retirement avoidance of the limelight:

“I wanted to get as far out of the limelight as possible. I was mentally drained. I got tired of 10 questions, nine negative. Ten questions, eight personal. I got worn down. It felt like people were ripping my body apart, pulling every which way.” Some days he was thrilled to be done with basketball (“I’d rather not play,” he told himself) and others he was mournful (“I still really want to play, though”). Fans would tell him, “AI, come back!” and he’d think about the teams that weren’t calling. “Damn, I want to come back, but they don’t want me. And I don’t want to play for somebody who doesn’t want me.”

On the basketball relationship between himself and his 13-year-old son ISAIAH:

“It’s hard to take constructive criticism from dad,” Iverson laments. “He can take it from coach, but when daddy tells, he thinks daddy is being hard on him because he was an NBA player and a scoring champion. It hurts him. It’s like I’m telling him to clean up his room.”

On the moment that he realized that the marriage was over between himself and his high school sweetheart TAWANNA:

“You have to realize, first of all, that you’re the f--- up. If you were mature enough to handle being married, if you played your part, all those bumps in the road would not have happened. So you have to point the finger at Allen Iverson. My divorce was long, long, long overdue. It was overdue a year after saying ‘I do.’ Obviously, it went on 12 more years, and that was because she didn’t want to break up our family. Divorce was her last idea of what to do to try to get my attention. She tried everything else in the book, even counseling, and none of it worked. The one thing that caught my attention was looking at that piece of paper and seeing Iverson vs. Iverson. 76ers vs. 76ers. Georgetown vs. Georgetown. You look across that courtroom and see the person you love more than life itself, and you get the picture. As strong as I am, that was my vulnerable moment.”

On what ultimately led him towards his renewed relationship with his now ex-wife and their 5 children:

“I wanted to be there for the PTA meetings, for the homework,” he says. “I can’t sit here and tell you I’m the greatest dad in the world. But I’m home. I can do the things I didn’t do for my older kids. That’s the thrill for me now. That’s the rush I used to get from basketball. She doesn’t have to always be the disciplinarian. She yells and screams. That’s what she does. Me, I give them a look. They think I might do something. In actuality, I won’t, because I’m wrapped around their finger.”

On how their relationship is still tumultuous, but; has matured:

“We still argue. In fact, we’re at odds right now—and here I am, acting like you’re my damn counselor—because I went home to Virginia for Mother’s Day, and after she went back to Charlotte to take the kids to school, I wanted to stay a little longer. She was like, ‘Bring yo’ ass home.’ I messed up. I was wrong again. It’s still happening. I used to tell the media, ‘When I’m 40, I won’t make the same mistakes.’ Damn lie. I still get cursed out for the same things I was doing 15 years ago. But we’ve learned that we can agree to disagree. And she’s still Mrs. Iverson, which is the title I always wanted her to have.”

On during his BASKETBALL HALL Of FAME INDUCTION CEREMONY SPEECH, thanking 135 people, and; from beginning to end, mentioning his wife:

“Did you notice what I did, though?” Iverson asks. “See, I got a few marbles left up here. I waited to talk about her until the end, because if I didn’t, I’d have lost it early. Being the emotional person I am, it would have gotten out of control, and I couldn’t play with my heart like that.”