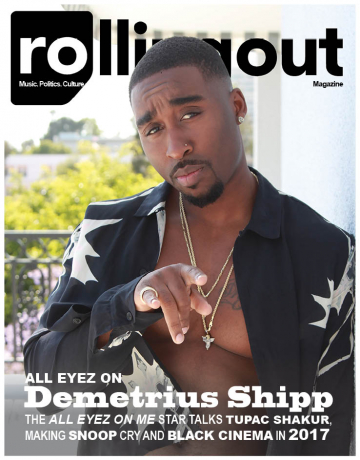 Actor DEMETRIUS SHIPP Jr portrays late Rapper/Actor/Poet TUPAC SHAKUR in the upcoming biopic ALL EYEZ ON ME, and he covers the new issue of ROLLING OUT Magazine!!!

On is understanding of Tupac as a being a multifaceted individual:

“Everybody has the Tupac that they admire, Certain people love the hip-hop person, the rapper. Strictly just the rapper. A lot of people, the newfound Tupac fans … they’re into Death Row-era Tupac. But that was only nine months! People think he was with Death Row all these years because he put out albums — [it was] technically nine months. But then you have the people that love the revolutionary side of Tupac. Some people like the crazy side of him [that was] always turnt up! Some people like the more sophisticated, voice of the people, leader-type of Tupac. We tried to combine all of that into one and present him as truthfully as possible.”

On because of changes in leadership, him having been preparing for the role since 2011:

“It was a long time coming. At that time, it was four or five years, I started in 2011. So a little over four years of preparation in trying to get the role. So aside from [being] excited, it was just [the] amazement that it’s come full circle.
“As far as research goes, I just watched a ton of video on Tupac. There’s a lot of him on YouTube. Night in and night out, I just watched that. And my acting coach, she put it on us to try and dive into his mind: what he liked, what his upbringing was like. I learned about the Black Panther Party. He loved Shakespeare — I read Shakespeare. Malcolm X. The Art of War.”
On the reception of the film by those who knew intimate details of Tupac's life:
“They’re not playing to my feelings. Nobody’s like, ‘OK, we don’t want to hurt this guy’s feelings, so say that he’s doing a good job.’ This is Tupac. They’re not going to be nice about it. Either they like it or they’re gonna say something about it. The reception has been good. Snoop [cried] in admiration of the film and missing his friend and understanding what happened.
“Leila Steinberg was Tupac’s manager and really responsible for bringing him to Digital Underground. She was the spark of his career. She is a big part of Tupac becoming the artist that he became. She came in like, ‘I was ready to tear this down. I didn’t believe anybody could get this right and capture the essence. But you made it happen.’ ”
On continuing to work at his craft:
“I was always critiquing my work. I let everybody else around — producers, directors, other actors — they give the nod of approval or the praise. Because I tried to always bring the best, so even if they were happy with it, I was still scrutinizing it. I will say that praising the work and admiring it means a lot to me. That’s all I can ask for.”
-CCG