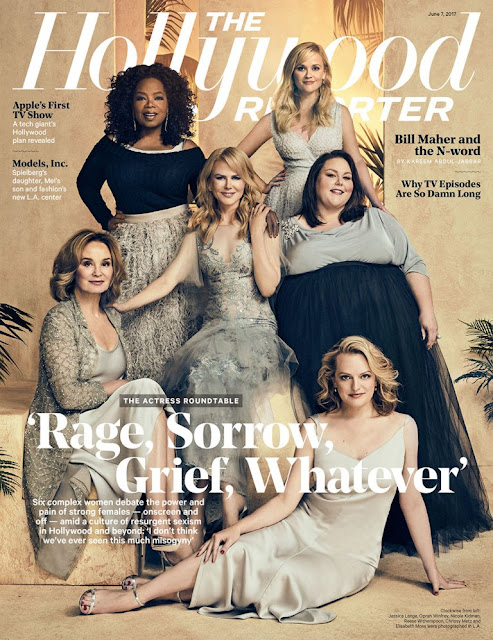 Queen OPRAH WINFREY is one of six leading dramatic actresses drafted to enlighten us on the intricacies of portraying complicated women for The HOLLYWOOD REPORTER - DRAMA ACTRESS ROUNDTABLE!!!

You have tackled ageism, sexism, misogyny, depression, domestic abuse, adultery and rape. When was the last time you were genuinely nervous to tackle a storyline?

OPRAH WINFREY (The Immortal Life of Henrietta Lacks, HBO) I was genuinely nervous to take on the role of Deborah Lacks because look at this table. I come as the least experienced person at this table. I come as a person who has great respect for the craft of acting — and for years interviewing actresses and being inspired by actresses, but not developing the craft. I was really afraid to do that.
Afraid of what, exactly?
WINFREY I was afraid of making a fool of myself! (Laughter.)
NICOLE KIDMAN (Big Little Lies, HBO) That's every day.
REESE WITHERSPOON (Big Little Lies, HBO) What are you talking about?! The Color Purpleis so amazing.
WINFREY When was that? That was like 30 years ago now. And let me tell you what actually made me even more intimidated: I just finished doing a film with Reese and Ava DuVernay and Mindy Kaling [A Wrinkle in Time], and I just happened to ask Reese, "How many films have you done?" And you said, "Oh, honey child …" (Laughter.)
WITHERSPOON Do you all know how many movies you've done?
WINFREY You said, "I don't know, 100 or so." I was thinking, "Oh, God, I hope she doesn't ask me because my number will be like, five, maybe?"
CHRISSY METZ (This Is Us, NBC) Oh, I've got you beat. I've done maybe one independent movie.
ELISABETH MOSS (The Handmaid's Tale, Hulu) I don't know if I was nervous about the scenes themselves, but [Margaret Atwood's] book itself is so beloved, so that was my only hesitation. I wanted to make sure that we were going to do the book justice and do it in the way that it should be done or we were going to get in trouble. I don't have any fear with scary stories. That's what I want to do. But I took six weeks to say yes because I wanted to make sure we were going to do a good job.
WINFREY And how did you make sure?
MOSS I spoke to Bruce [Miller], our showrunner, for about an hour and a half. I was in Australia doing the second season of Top of the Lake with Nicole [at the time]. And then I spoke to Warren Littlefield, our EP, and to Hulu. I asked for the second script because I know the second script can be a little bit of a … (Laughter.)

WINFREY Everybody's so excited over the pilot and then … yeah.
MOSS Exactly. Everyone spent 10 years on [the pilot], and then you get the second script and you're like, "Really?! Is there a third one?" And then one night I was thinking about saying no. I just wasn't sure what to do and I couldn't sleep. I don't know if anyone else does this, but if you're thinking about taking a role, I pretend that I said no to see how that feels. I felt terrible and was super jealous of whoever did it and then I knew.
As actresses, and producers, too, do you feel a responsibility to shed light on these topics?
WITHERSPOON Absolutely. I think everyone at this table is mission-driven. We all have a mission to understand the greater humanity of women and to promote that. Nobody has done that more than you (turns to Winfrey).
WINFREY And a few cool men, too.
WITHERSPOON A few cool guys, yeah. But just examining the human condition and also putting a bigger array and a more dynamic idea of what a woman is and what her experience is — and I think it has been such a great year. I look around the table [and think] about what these shows are and the topics that are coming up because of these shows, and it's incredible. I have been talking about [The Handmaid's Tale] ad infinitum at dinner parties because it feels possible. I mean, you're jogging and then you go in to buy a coffee and your credit card doesn't work anymore. It could be any one of us.
WINFREY It feels ominous. It's the reason why I heard you (turns to Moss) saying that it's the one show that you don't think people should binge-watch, and I agree with you.


MOSS You won't be able to get out of bed. And it needs to be digested and thought about.
Oprah, sexual violence has been a theme in your work dating to The Color Purple. What draws you to those stories?
WINFREY I keep trying to share with the world what it means not just to be sexually violated but what it means to have someone who is a predator in your own space and to be preyed upon. Just as Reese was saying, we're all about sharing the story that is going to raise consciousness on any level. I tried to do it for many years [on my talk show]. I did 127 interviews with victims of molestation, sexual abuse, sexual violence or the molesters and rapists themselves in one form or another. And at the end of the show, I said it's the one message I think I failed at — allowing people to see the depth of the pain, because everybody looks at the act itself, particularly when it comes to sexual molestation, and they want to know: Was there penetration or not? So I tried and tried and tried and tried. Now I'm doing it through our storyline on Greenleaf [on OWN]. I try to do it with the subjects that I choose, the books that I choose, always trying to let people see the light of that.
WITHERSPOON Sometimes art is a way that sort of removes you in a certain capacity.
WINFREY I think it's actually the best opportunity for people to see themselves. 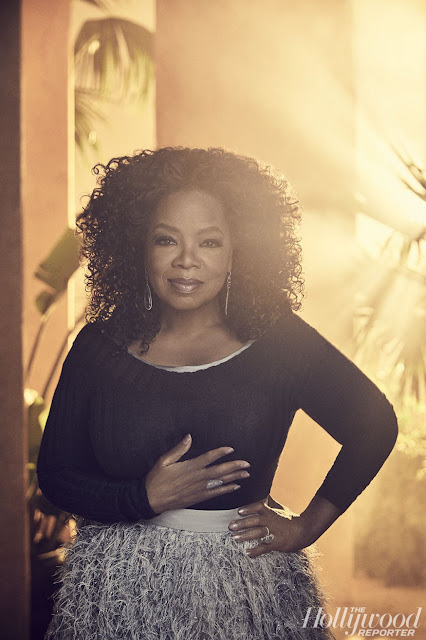 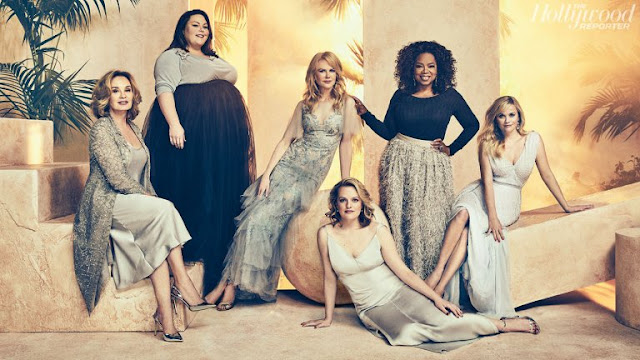