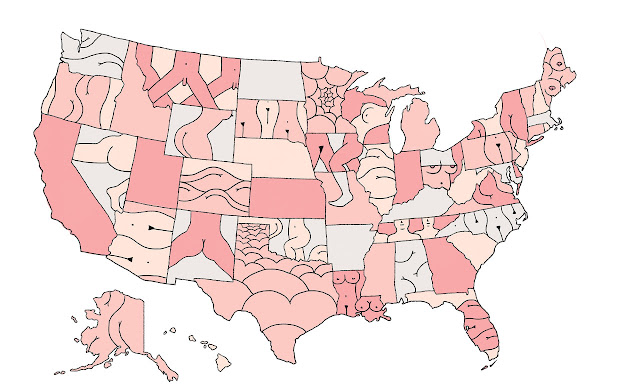 Courtesy of the really generous folks at PLAYBOY Magazine, here is the definitive map of WHERE in EVERY STATE in The UNITED STATES Of AMERICA YOU CAN WALK AROUND In YOUR BIRTHDAY SUIT - EVEN When IT Is NOT YOUR BIRTHDAY.

Here are some legal highlights:

CALIFORNIA
LEGAL NAKED HIKING
In 2006, the Los Angeles County Sheriff’s Department wrote a letter to a California attorney stating that “simply hiking in the forest, in the nude, is not a violation of the law.”

FLORIDA
“TOPLESS” WITH A TOP ON
Women must cover up “while performing customary ‘barroom’ type of nude dancing commonly referred to as ‘topless’ and/or ‘bottomless’ dancing.” So…no topless “topless” dancing? Go figure.

HAWAII
MARRIED AND NUDE
The law explicitly (get it?) states that public indecency is illegal if the parties involved are not married. Otherwise, game on.
IOWA
MANDATORY THONGS
There are no legal all-nude establishments in the entire state. Thank God for the Herbert Hoover Presidential Library.
KENTUCKY
BIKINI BODYGUARDS
Until 1975, appearing on the highway in bathing garb without an escort was a crime for women—unless they were armed with clubs.
LOUISIANA
NO SEXY STREAKING
You will be fined for appearing naked in public “with the intent of arousing sexual desire.”
MASSACHUSETTS
FREEDOM TO DANCE NAKED
Nude dancing is protected under the First Amendment except when “imposed on an unsuspecting or unwilling audience.” God bless America!
OHIO
ILLEGAL UNDERBOOB
The state forbids showing a “female breast with less than a full, opaque covering of any portion thereof below the top of the nipple.”
OREGON
NUDES AGAINST THE MACHINE
Public nudity is illegal, but courts have made exceptions for naked protestors
UTAH
BE ADVISED
A sign at Diamond Fork hot springs warns, “Although nudity is not prohibited on Forest Service land, discretion is advised.” Yes, and try not to think about snakes.
-CCG