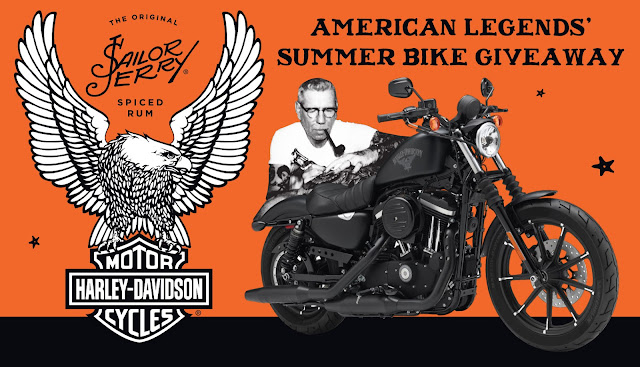 SAILOR JERRY - ORIGINAL TATTOOS & SPICED CARIBBEAN RUM is partnering with legendary motorcycle manufacturer HARLEY-DAVIDSON to give YOU an opportunity to win 1 of their 22 custom made bikes in the their AMERICAN LEGENDS' SUMMER BIKE GIVEAWAY 2017!!!


Not only will you be on the back of a motorcycle, these Harleys have been uniquely customized. Acclaimed tattoo artists Jonathan Valena (aka JonBoy), Oliver Peck and Megan Massacre. Beyond the ink artists customizing bikes, popular Miami-based muralist Alexander Mijares participated. The roster rounded out with celebrated automotive designer Michael “BuckWild” Ramirez and artist L'Amour Supreme.
The artists were given a deceptively simply task: reinterpret the infamous flash art style of Norman “Sailor Jerry” Collins into their unique motorcycle design. The bikes will be available for viewing around the country all summer at liquor retailers, Sailor Jerry’s Fleet Week New York celebrations, the Harley-Davidson Museum and more.
Beyond the sweepstakes, expect quite a few shared events eventually culminating in Harley-Davidson’s 115th Anniversary in 2018.
REGISTER and ENTER To WIN at AMERICAN LEGENDS' SUMMER BIJE GIVEAWAY 2017.