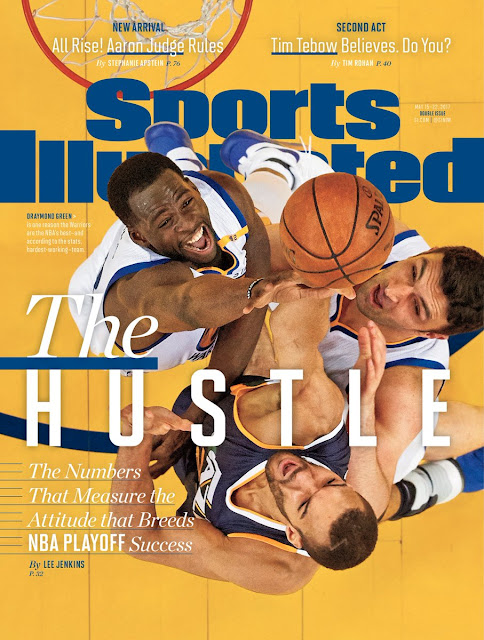 The GOLDEN STATE WARRIORS Deadly Combination of HUSTLE & FLOW Create the NUMBERS That MEASURE The ATTITUDE That BREEDS NBA PLAYOFF SUCCESS and gets them the cover of the new issue of SPORTS ILLUSTRATED Magazine!!!

In 2001, the DENVER NUGGETS hired former NBA Sharpshooter KIKI VANDEWEGHE as General Manager, who after his years of both NBA playing and coaching had come to the conclusion the EFFORT Is a SKILL.

By the time VANDEWEGHE landed at the NBA Front Office as VICE PRESIDENT Of BASKETBALL OPERATIONS, hoop-heads were versed in Player Efficiency Rating (PER) and Wins Above Replacement Player (WARP), among dozens of elaborate metrics that extol LeBron James. Yet there was still no universal method to identify the glorious grinders who lay sledgehammer screens on one end and gum up passing lanes on the other.

HUSTLE STATS were scarce in part because they are subjective. While a computer can spit out a heat map, it can't gauge the quality of a shot challenge. For that, you need humans, trained to consume games as Riles intended. Which is why, starting this season, the NBA hired 15 new employees to track every deflection, contest, charge, loose ball and screen assist. The numbers are distributed to teams and available to fans on NBA.com. The loggers are former high school coaches, college players, camp counselors and referees. They are round-ball junkies like Andre Blackwood, 25, who played at Paramus Catholic when Cavaliers guard Kyrie Irving was at nearby St. Patrick's. "St. Pat's beat us by 70 points in a scrimmage once," Blackwood recalls, "and Kyrie was still diving on the floor at the end." Now Blackwood sits in front of a monitor every night at the league's headquarters in Secaucus, N.J., eyes fixed on those loose balls.
All eight second-round teams, the loggers discovered, employ at least one Charlie Hustle. Patrick Beverley, Houston's Doberman pinscher of a point guard, snagged the most loose balls per game this season (1.6). Washington's Marcin Gortat and Utah's Rudy Gobert set the most screens that led directly to buckets (6.2), with Cleveland's Tristan Thompson not far behind (4.8). Toronto's Kyle Lowry rated fifth in deflections (3.7), just ahead of San Antonio's Kawhi Leonard (3.4). Boston's Marcus Smart was fifth in total charges (24), edging Beverley (22). Gobert also shone in multiple columns, finishing second in two-point contested shots (12.7), as did Wizards point guard John Wall, tied for third in deflections and second in loose balls.


"Effort is very apparent when you're talking about the limited player who by sheer will and drive makes it into the mainstream. It's apparent why Patrick Beverley is Beverley and Draymond Green is Draymond. It's less apparent why Kevin Durant is Kevin Durant. But you can't say the effort isn't the same with someone of a higher skill level to maintain what they do. You know, I don't even call it a contest. I call it a challenge. But here's another thing to consider: Your idea of a challenged shot may not be the same as my idea. If somebody closes out with his hand up, staying on the ground, is that a challenged shot? To me it's a half-assed challenged shot. I think it's important to remember we're not playing baseball. There are some things you just can't quantify."