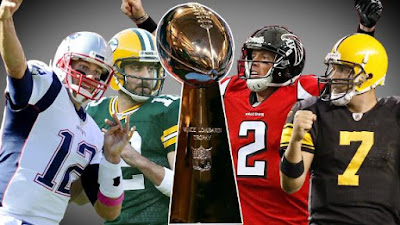 This SUNDAY, JANUARY 22, 2017; the 2017 NFL CONFERENCE CHAMPIONSHIP GAMES will take place, with the GREEN BAY PACKERS coming here to ATLANTA, GA, to face the ATLANTA FALCONS for the NFC CHAMPIONSHIP, and; the PITTSBURGH STEELERS traveling to FOXBOROUGH, MASS, to face the NEW ENGLAND PATRIOTS for the AFC CHAMPIONSHIP,  in  effort to make it to HOUSTON, TX, for SUPER BOWL LI (51)!!!

That means that it will be GREEN BAY PACKERS QB #12 AARON RODGERS vs. ATLANTA FALCONS QB #2 MATT RYAN, and; PITTSBURGH STEELERS QB #7 vs. NEW ENGLAND PATRIOTS QB #12 TOM BRADY; four of the most prolific game-winning quarterbacks in the history of the NFL.

ESPN: NFL LIVE Host TREY WINGO asks RYAN CLARK, TIM HASSELBECK, and Coach HERM EDWARDS, to give their prognostications for the scenario of if they only had one game; which of these four field generals would they start as QB???