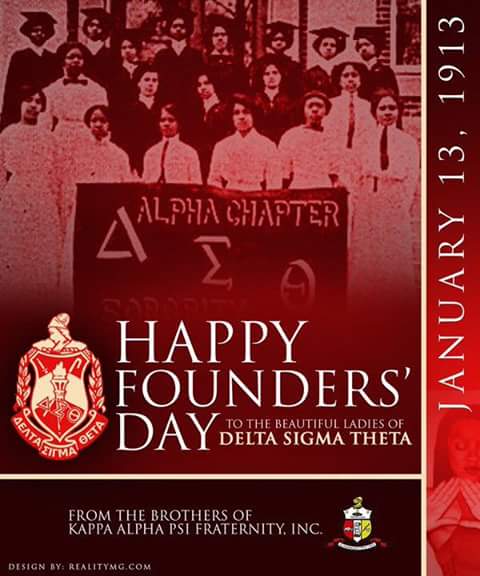 Yours Truly CCG and The GENTLEMEN In KRIMSON And KREAM Of KAPPA ALPHA PSI FRATERNITY, Inc. would like to say KRAZY KOOL GROOVY KONGRATULATIONS and HAPPY 104TH FOUNDERS' DAY to ALL of The DEVASTATING DIVAS In CRIMSON And CREAM of DELTA SIGMA THETA SORORITY, Inc.!!!

DELTA SIGMA THETA  was founded January 13, 1913; on the campus of HOWARD UNIVERSITY in WASHINGTON, D.C. Because of their of January 13, many members now affectionately refer to their founding date as #J13.


DELTA SIGMA THETA  is a private, not-for-profit organization whose purpose is to provide assistance and support through established programs in local communities throughout the world. Since its founding more than 200,000 women have joined the organization. The organization is a sisterhood of predominantly Black, college educated women. The sorority currently has 1,000 collegiate and alumnae chapters located in the United States, England, Japan (Tokyo and Okinawa), Germany, the Virgin Islands, Bermuda, the Bahamas, Jamaica and the Republic of Korea.

The major programs of the sorority are based upon the organization's Five Point Programmatic Thrust. More than ten thousand members typically attend Delta Sigma Theta Sorority, Incorporated's biennial national conventions, and each of the seven regional conferences (held during years when there is no national convention) typically hosts thousands of members. At its recent 51st National convention held in the District of Columbia, more than 38,000 members registered and attended.