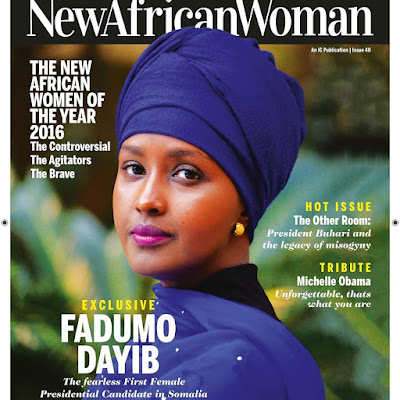 In 1972, Chocolate-Covered FADUMO DAYIB was born to SOMALIAN refugee parents in a displacement camp in KENYA!!!

In 2016, the 44-year-old FADUMO DAYIB made SOMALIAN HISTORY as the first woman to openly seek the office of PRESIDENT Of SOMALIA. Citing allegations of governmental corruption, harassment, fraud, and intimidation, which included threats against her life, and the lives of her husband and four children; she withdrew from the race.

Give us a little background. Who is FADUMO DAYIB?

Fadumo :Oh my God! I wish I knew why they are getting excited about Fadumo. I was born into displacement to two illegal Somali immigrants in Kenya. My father was a truck driver who spoke several different languages fluently, although he was illiterate and he couldn’t read and write. My mother was a nomad who had a head for numbers and she was a brilliant mathematician. She could just calculate figures off the top of her head while others struggled with the calculator. Despite the fact that she was also not formally educated. She only started reading and writing at a very late stage of her life, just before she died in Finland. These are the two wonderful human beings who brought me into this world.

My mother had been married off at a young age as a child bride and she had lost 11 children as a young mother to treatable diseases. Eventually she was told: “Go to Kenya maybe you might have children who stay alive.” And so she did and she set off with her brother. They were given a lift in a truck by a man who fell in love with her. Although they were both in the country illegally, he proposed and got married and they soon gave birth to me had me in a place called Thika. I was also a sickly child, and having lost 11 children already my mother was always worried, but I managed to survive. My second name is Deeqo, which means “sufficient”. My mother said if this child stays alive and she’s the only child I will have, she is sufficient. Thankfully she came to have two more. I have a young brother and sister.
Somalia is a country that has gone through a lot and lasting security and stability you mention, remains largely elusive. As a woman in a country which is very well-known for its patriarchy and the denigration of women, you are going in with your hands tied at the back, how do you react to that?
I don’t react negatively and I don’t take offence because such views I believe reflect the current world order, not just Somalia as to how women are treated. Just look at what has happened in America and to Hilary Clinton, where 40% of the white women, educated, emancipated white women decided to vote for a man who believes women should be grabbed by their pussies. This is really not just an African issue, it is a global problem.
As women, particularly women who are empowered, who want to make a difference in the world, we are facing a huge problem and its more evident now – if anyone is in doubt, just look at what has happened in America.
So how are you working your campaign?
I have moved to, and set up a base in Somalia. I have been here for the past one month now. I have resigned from my job, I have left my family in Finland.
Are you all right and do you feel safe?
I am here not just without proper funding, but without even proper security.
Lack of security should surely be of a big concern to you as a mum and it’s a huge sacrifice, Somalia’s problems with security and assassinations is well documented, why , many will ask, are you risking life for this? Is that the case?
Yes I have received death threats and even now that I am in Mogadishu, I am constantly very much aware of the fact, that every time I leave my house, that could be the last time I am leaving that compound and that I might not return there.
That’s very scary. Is it worth it?
Yeah, it’s a very constant awareness, even when you are sleeping at night, that I might not make it until tomorrow morning. Anyone can throw a bomb here, anyone can come in with a suicide vest but you know what? I believe twelve million Somalis are worth that, they are worth that. Somalia is worth that, it is worth my life, I love my country and I love my people.
If you became the next President of Somalia what would you actually prioritise? what is the most pressing issue that is holding such a great country back?
Security is the main thing that I would focus on, because really without security you cannot have peace and you cannot have economic prosperity.
And how would you do that?
By negotiating, having a dialogue with Al-Shabaab, that would be my first priority because it is important that we are able to have a dialogue with even people, the most repulsive segment of the society we must learn to be able to even dialogue with them and not resort to violence because violence, every time.
If violence were to bring any solution Somalia would be the most peaceful country in the world today, considering the amount of violence that has gone on. And so dialogue is very important, but there are three conditions which Al-Shabaab must meet: it must disarm, it must stop killing Somalians and it must renounce its affiliation with international terrorism.
-CCG