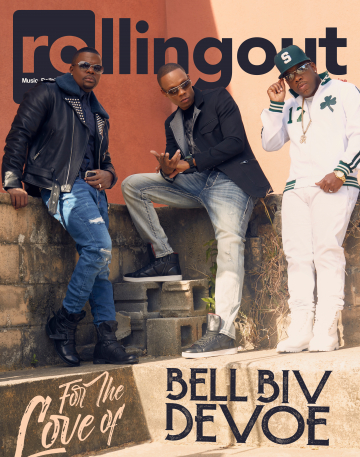 The NEW EDITION STORY is finally airing this week, TUESDAY - THURSDAY, JANUARY 24 - 26, 2017; on BET as a three-night-6-hour biopic miniseries which tells the story of the legendary 6-man R&B Group!!!

With the return of NEW EDITION to the spotlight also comes the return of its own spinoff acts as BOBBY BROWN, JOHNNY GILL, and RALPH TRESVANT emerged as successful solo artists, while RICKY BELL, MICHAEL BIVINS, and RONNIE DeVOE formed the wildly-popular R&B-HIP HP trio, BELL BIV DEVOE, or simply; BBD.

The brothers of BELL BIV DEVOE cover the new issue of ROLLING OUT Magazine.

January is a big month for you guys. Before we get into the movie, tell us about your new album, Three Stripes.  When will it drop?
Ron DeVoe: Jan. 27, as a matter of fact. The first Bell Biv DeVoe album in a while. We’ve been performing and doing those classics since 2001, and we’ve always kind of focused there. We were bred to be entertainers first, so that’s our mentality. Fast-forward to now, and people have always been asking us, “When will y’all drop a new joint?” And it drops the day after the movie, at midnight on the 27th of January.
Why Three Stripes? What does that name mean?
Michael Bivins: Back home in Boston, Adidas is like a heavy street product for footwear and sweatsuits. We just hold on to that product so strongly that we thought coming back out there’s three of us, and a lot of the groups that we look up to are three-men, three-women groups: SWV, Naughty by Nature, Next, Boyz II Men now (hopefully, we get them back to 4, God willing). But there’s something about that “three.” We didn’t want to overthink the title. We’re not overthinking the music.
RD: And just the history of Bell Biv DeVoe. When you look at it from a military perspective, they gotta earn their stripes. When you go from a private to a general, you have to earn your stripes, and we feel like each one of us, as far as BBD history and even before then with New Edition, that’s 30-plus years. We earned our stripes.
Describe the bond between the three of you.
RD: Well, it’s definitely not a forced thing. The bond between us probably goes back even before me, to Rick and Mike back in Orchard Park projects. And I guess you can add Bob [Bobby Brown] in that, too. That dude could very well be sitting right here and it would feel just as organic. So it goes back a long way. But when I was introduced to it in 1980, it just felt like — probably because we were more of the background in New Edition — we just gravitated to each other. Like Rick said, sometimes you can’t explain why things play out the way they do. It’s almost like it’s a divine situation, and you’re just walking the walk, not knowing back in 1983 that the reason we were clicking would play itself out in us forming this group. But I do think that a big part in us banding together was that we were always the guys that were the farthest from the light. It would be Ralph [Tresvant] and Bob up front, and Rick would jump in every now and then, but it was mostly us playing the background. And that bond was just steadily growing.
MB: I just think that we all know our roles. I think that sometimes when you’re on a team, there are people who want to do things that they aren’t really great at because they think that is where the light is at. Like, we know when we walk through the door that Rick is going to carry us. And when he gets finished carrying us, then me and Ron are going to come through and do what we do. We allow it to be an equal partnership between us, because it keeps your spirits up, and makes you feel needed. And like Ron said, we formed this, and didn’t even know that we were creating a group. This is probably one of the most cohesive units out there, and a lot of other groups ask us the same thing.
It’s been a long time coming, but you are getting your respect due for three nights with “The New Edition Story.” How does that feel?
RD: Man, three nights is big. I think it’s just a testament to the history, and to the fans — the NE-for-lifers who have just continued to stick with us since 1983, and who have propped us up and weathered the storms. We have a joint called “Can You Stand the Rain” that is significant because it really tells our whole stories. We’ve been able to survive all of the ups and downs, and now, after over 34 years in the game, we are getting the chance to tell our story. All of the turmoil that we have gone through over the last 10 years to make this project come to life has finally paid off, because, man, getting those six signatures [Johnny Gill was also a New Edition member] to sign on the dotted line wasn’t easy. But now it just feels good to sit back and watch the footage and see how people react to it. We had a premiere in New York and hearing the laughter and feeling the pain was just surreal. And for it to be three nights just makes it that much more special.
RB: I still haven’t found the right words to describe the excitement, the anxiety, and the anticipation of it, because you want to brag about having a movie done about you, but to be honest, we’re just really humbled by all of this. God blessed us at the right time to have this happen when we were at a place in our lives where we felt OK with opening up and sharing with you in a healing way.
Posted by CCG at 7:43 PM