MY PRESIDENT Was BLACK: President BARACK OBAMA On The ATLANTIC MAG!!! 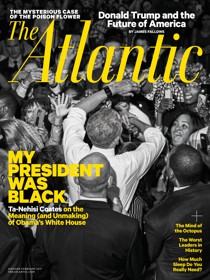 In the waning days of President Barack Obama’s administration, he and his wife, Michelle, hosted a farewell party, the full import of which no one could then grasp!!!

It was late October, Friday the 21st, and the president had spent many of the previous weeks, as he would spend the two subsequent weeks, campaigning for the Democratic presidential nominee, Hillary Clinton. Things were looking up. Polls in the crucial states of Virginia and Pennsylvania showed Clinton with solid advantages. The formidable GOP strongholds of Georgia and Texas were said to be under threat. The moment seemed to buoy Obama. He had been light on his feet in these last few weeks, cracking jokes at the expense of Republican opponents and laughing off hecklers. At a rally in Orlando on October 28, he greeted a student who would be introducing him by dancing toward her and then noting that the song playing over the loudspeakers—the Gap Band’s “Outstanding”—was older than she was. “This is classic!” he said. Then he flashed the smile that had launched America’s first black presidency, and started dancing again. Three months still remained before Inauguration Day, but staffers had already begun to count down the days. They did this with a mix of pride and longing—like college seniors in early May. They had no sense of the world they were graduating into. None of us did.

This would not happen again, and everyone knew it. It was not just that there might never be another African American president of the United States. It was the feeling that this particular black family, the Obamas, represented the best of black people, the ultimate credit to the race, incomparable in elegance and bearing. “There are no more,” the comedian Sinbad joked back in 2010. “There are no black men raised in Kansas and Hawaii. That’s the last one. Y’all better treat this one right. The next one gonna be from Cleveland. He gonna wear a perm. Then you gonna see what it’s really like.” Throughout their residency, the Obamas had refrained from showing America “what it’s really like,” and had instead followed the first lady’s motto, “When they go low, we go high.” This was the ideal—black and graceful under fire—saluted that evening. The president was lionized as “our crown jewel.” The first lady was praised as the woman “who put the O in Obama.”

Last spring, I went to the White House to meet the president for lunch. I arrived slightly early and sat in the waiting area. I was introduced to a deaf woman who worked as the president’s receptionist, a black woman who worked in the press office, a Muslim woman in a head scarf who worked on the National Security Council, and an Iranian American woman who worked as a personal aide to the president. This receiving party represented a healthy cross section of the people Donald Trump had been mocking, and would continue to spend his campaign mocking. At the time, the president seemed untroubled by Trump. When I told Obama that I thought Trump’s candidacy was an explicit reaction to the fact of a black president, he said he could see that, but then enumerated other explanations. When assessing Trump’s chances, he was direct: He couldn’t win.

When barack obama was 10, his father gave him a basketball, a gift that connected the two directly. Obama was born in 1961 in Hawaii and raised by his mother, Ann Dunham, who was white, and her parents, Stanley and Madelyn. They loved him ferociously, supported him emotionally, and encouraged him intellectually. They also told him he was black. Ann gave him books to read about famous black people. When Obama’s mother had begun dating his father, the news had not been greeted with the threat of lynching (as it might have been in various parts of the continental United States), and Obama’s grandparents always spoke positively of his father. This biography makes Obama nearly unique among black people of his era.

Just after columbus day, I accompanied the president and his formidable entourage on a visit to North Carolina A&T State University, in Greensboro. Four days earlier, The Washington Post had published an old audio clip that featured Donald Trump lamenting a failed sexual conquest and exhorting the virtues of sexual assault. The next day, Trump claimed that this was “locker room” talk. As we flew to North Carolina, the president was in a state of bemused disbelief. He plopped down in a chair in the staff cabin of Air Force Oneand said, “I’ve been in a lot of locker rooms. I don’t think I’ve ever heard that one before.” He was casual and relaxed. A feeling of cautious inevitability emanated from his staff, and why not? Every day seemed to bring a new, more shocking revelation or piece of evidence showing Trump to be unfit for the presidency: He had lost nearly $1 billion in a single year. He had likely not paid taxes in 18 years. He was running a “university,” for which he was under formal legal investigation. He had trampled on his own campaign’s messaging by engaging in a Twitter crusade against a former beauty-pageant contestant. He had been denounced by leadership in his own party, and the trickle of prominent Republicans—both in and out of office—who had publicly repudiated him threatened to become a geyser. At this moment, the idea that a campaign so saturated in open bigotry, misogyny, chaos, and possible corruption could win a national election was ludicrous. This was America.

Obama’s greatest misstep was born directly out of his greatest insight. Only Obama, a black man who emerged from the best of white America, and thus could sincerely trust white America, could be so certain that he could achieve broad national appeal. And yet only a black man with that same biography could underestimate his opposition’s resolve to destroy him. In some sense an Obama presidency could never have succeeded along the normal presidential lines; he needed a partner, or partners, in Congress who could put governance above party. But he struggled to win over even some of his own allies. Ben Nelson, the Democratic senator from Nebraska whom Obama helped elect, became an obstacle to health-care reform. Joe Lieberman, whom Obama saved from retribution at the hands of Senate Democrats after Lieberman campaigned for Obama’s 2008 opponent, John McCain, similarly obstructed Obamacare. Among Republicans, senators who had seemed amenable to Obama’s agenda—Chuck Grassley, Susan Collins, Richard Lugar, Olympia Snowe—rebuffed him repeatedly.

The obstruction grew out of narrow political incentives. “If Republicans didn’t cooperate,” Obama told me, “and there was not a portrait of bipartisan cooperation and a functional federal government, then the party in power would pay the price and they could win back the Senate and/or the House. That wasn’t an inaccurate political calculation.”

Obama is not sure of the degree to which individual racism played into this calculation. “I do remember watching Bill Clinton get impeached and Hillary Clinton being accused of killing Vince Foster,” he said. “And if you ask them, I’m sure they would say, ‘No, actually what you’re experiencing is not because you’re black, it’s because you’re a Democrat.’ ”

I knew that the man who could not countenance such a thing in his America had been responsible for the only time in my life when I felt, as the first lady had once said, proud of my country, and I knew that it was his very lack of countenance, his incredible faith, his improbable trust in his countrymen, that had made that feeling possible. The feeling was that little black boy touching the president’s hair. It was watching Obama on the campaign trail, always expecting the worst and amazed that the worst never happened. It was how I’d felt seeing Barack and Michelle during the inauguration, the car slow-dragging down Pennsylvania Avenue, the crowd cheering, and then the two of them rising up out of the limo, rising up from fear, smiling, waving, defying despair, defying history, defying gravity.

Then; PLEASE go to The ATLANTIC MAGAZINE and get a good reading of the FULL ARTICLE as Author/The ATLANTIC National Correspondent Ta-NEHISI COATES gives the history and meaning of President and First Lady BARACK and MICHELLE OBAMA and the first BLACK WHITE HOUSE, and; WHAT CAME NEXT, as he proclaims what future generations may never have the opportunity to experience; MY PRESIDENT Was BLACK!!! 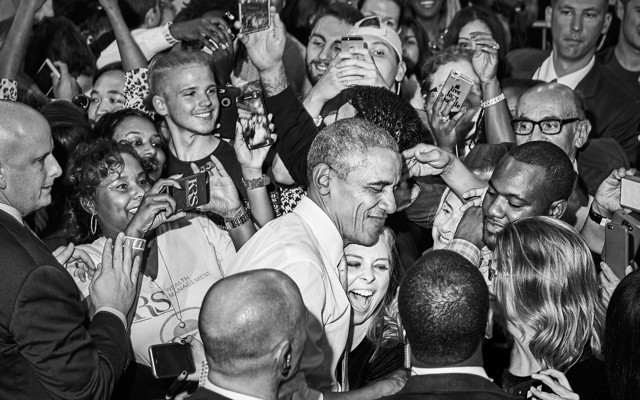