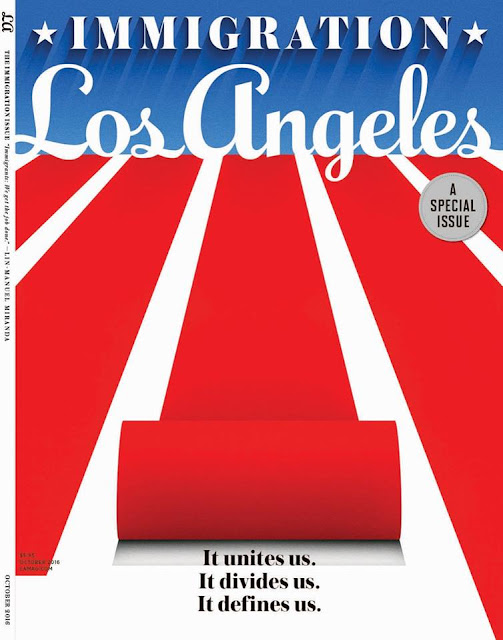 Both of the legal and illegal ilk, IMMIGRATION is one of the hot-button issues during this 2016 PRESIDENTIAL ELECTION CYCLE!!!

The City of LOS ANGELES has found itself to be the epicenter of the heated issue that has truly become a GLOBAL ISSUE, and; it is so global that the really good folks at LOS ANGELES Magazine decided to devote very single page of the October 2016 edition of their publication to LOS ANGLES Magazine: THE IMMIGRATION ISSUE.

"More than a year ago we at Los Angeles magazine decided to tackle the topic of immigration (we plan ahead). Then something unexpected happened: A real estate developer-reality show star turned immigration into the defining issue of this election. With Los Angeles the epicenter of a debate that now stretches around the globe, the timing was perfect to shake up the magazine that readers have come to know. We devoted every page of the October 2016 print issue to immigration in L.A. In the stories, we discuss what the city would be like without the contribution of immigrants. We also outline the immigrant experience from start to finish, offer insights into the effect immigrants have had on California’s politics and economy, and invite writers who landed here from around the world to show us Los Angeles through their eyes."