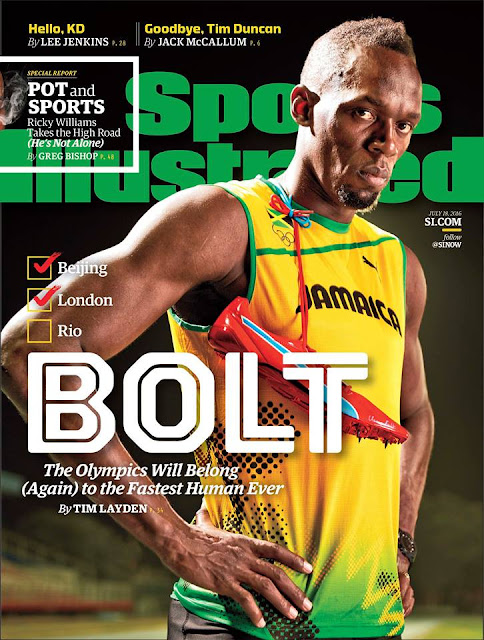 About one month ago, the good folks over at SPORTS ILLUSTRATED Magazine used this cover story to predict that the RIO 2016 SUMMER OLYMPICS would belong to JAMAICAN 2-Time OLYMPIC GOLD MEDAL Sprinter USAIN BOLT!!!

On July 1, USAIN BOLT withdrew from the TEAM JAMAICA OLYMPIC TRIALS because of a hamstring injury, yet; was still selected for the team via a medical exemption.

The Sports Illustrated prophecy was revealed on Sunday, August 14, as Mr. USAIN St. LEO BOLT retained his title of The WORLD'S FASTEST MAN by posting a time of 09.81seconds to win the GOLD MEDAL for the MEN'S 100 METER DASH at the RIO 2016 OLYMPICS.

CRAZY COOL GROOVY CONGRATULATIONS goes out to USAIN BOLT for winning the GOLD MEDAL for the 100 METER DASH, and; because he also won GOLD at the BEIJING 2008 SUMMER OLYMPICS and LONDON 2012 SUMMER OLYMPICS; his 2016 victory makes him the FIRST OLYMPIAN to win 3 OLYMPIC GOLD MEDALS for the 100 Meter Dash.