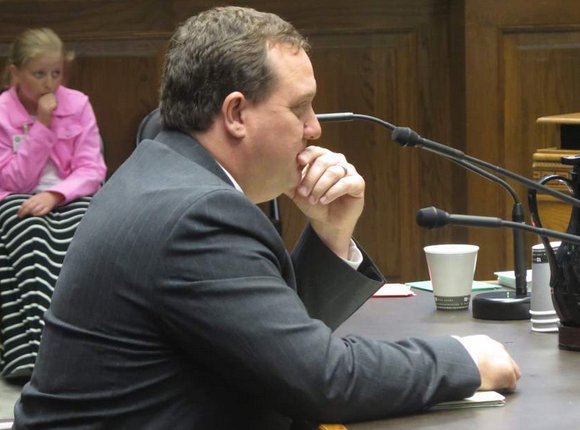 Earlier this week in BATON ROUGE, LA; State Rep. KENNY HAVARD (R: St. FRANCISVILLE) officially submitted a written amendment to legislation that would have mandated dancers at strip clubs be no older than 28 and no heavier than 160 pounds!!!

When challenged by other legislators, he quickly withdrew the amendment and later called it a joke about overregulation.

Because the hole was made while In Session, it is now an official part of the legislative public record, and did upset several female lawmakers in the House, who called it a new low for inappropriate and sexist comments that regularly pervade the State Capitol.

The ADVOCATE  reports  Senate Bill 468, by Sen. RONNIE JOHNS (R: LAKE CHARLES), would raise the age of dancers at strip clubs from 18 to 21.
Rep. WALT LEGER, III, (D: NEW ORLEANS), who presented the measure on Johns’ behalf, said the legislation is intended to combat human trafficking, as recent stings have found underage homeless youth and foster children who have aged out of the system being targeted to work at clubs where prostitution and drug dealing flourish.
As the bill was being presented, Havard — saying he wanted to “trim the fat” — offered his amendment. He withdrew the amendment after another lawmaker called it offensive.
Rep. KENNY HAVARD said;

“Looking out over this body, I’ve never been so repulsed to be a part of it. It has got to stop. That was utterly disrespectful and disgusting.”

Despite his objection to overregulation, Havard voted for the bill, which passed the House 96-0. He said it was unnecessary to apologize but that he respects Stokes.
During debate on SB468, other legislators made light of the situation by throwing single dollar bills on a table next to the podium.
Rep. NANCY LANDRY (R: LAFAYETTE) said;

“You hear a lot of things behind the scenes with people joking, but for someone to put something like that in a public record and actually go to the front and introduce this as an amendment in this chamber — it was completely uncalled for and it was offensive. And this is a serious bill that has to do with human trafficking, and it was treated like a joke.”

Johns, the bill’s sponsor, said he understands why women would be offended by the joke, but he doesn’t believe Havard meant any harm by it.
Sen. RONNIE JOHNS said;

“I know him to be a real gentleman with great respect for women, It’s unfortunate things don’t always come out as intended, and it was ill-timed.”