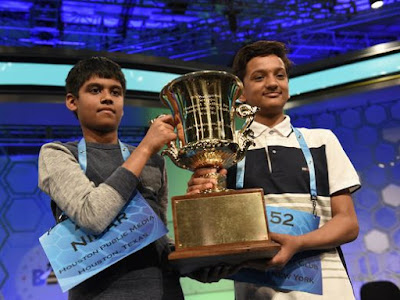 ESPN  reports 13-year-old JAIRAM is the younger brother of 2014 Co-Champion SRIRAM HATHAWAY, and; at age 11, NIHAR is the youngest Spelling Champion to date.

2016 marks the third consecutive year that the competition has ended in a tie.


Nihar's and Jairam's parents are immigrants from south India, continuing a remarkable run of success for Indian American spellers that began in 1999 with Nupur Lala's victory, which was later featured in the documentary "Spellbound." The bee has produced Indian American champions for nine straight years and 14 out of the past 19.
Before 2014, the bee hadn't declared co-champions in more than 50 years, but now, it seems little can be done to avoid it. The competition concluded shortly before 11 p.m. ET, with the winners having spent seven hours on stage, and bee executive director Paige Kimble has said she wouldn't consider forcing the final spellers to keep going indefinitely.
Even the WORLD Of SPORTS TOOK To SOCIAL MEDIA to express their reactions to The BEE.
-CCG