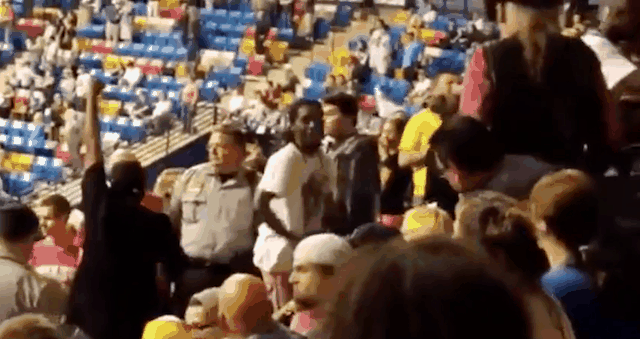 The footage shows a white man in a cowboy hat walk down the row to the aisle where protesters are leaving and sucker-punch an African-American man, later identified as RAKEEM JONES.

Moments before the attack, the protester appeared to wave a middle-finger at the crowd on his way out. Men in uniforms that read “Sheriff’s Office ” were leading the protesters away.

"The police jumped on me like I was the one swinging. My eye still hurts."

An official from the Cumberland County Sheriff’s Office said there is a suspect, and that two investigations into the incident were underway — one internal and one potentially criminal. The official also defended the deputies’ actions at the rally on Wednesday.

"Our mission was to make sure all of the 14,000 people stay safe, to separate the protesters from the supporters and to assist them as quickly as possible. What we did was to de-escalate the situation."

Swain also cautioned not to take a “10-second video out of context,” referring to a moment where Jones is lying on the ground with deputies surrounding him, adding that “you don’t know whether he fell or whether he was taken to the ground.”

"When we look at all of the video, we'll make the final determination what took place."

The sheriff's office has denied its officers detained the protester.

Help me identify the racist Trump supporter who repeatedly punched this protestor in the face last night.