#BLACKGIRLMAGIC: SPELMAN PRODUCES As MANY TECH START-UPS By BLACK WOMEN As IVY LEAGUES!!!

KATHRYN FINNEY said one of the project’s goals was to put some numbers behind how black women were faring in the entrepreneurial space of technological start-ups compared to their white, male peers.
So, she tracked 88 BLACK WOMEN who led start-ups and compared them to wider averages in the same space.
Spelman placed 10th for producing two black female founders of tech start-ups, Finney said citing the research released earlier in February. That’s the same number as Stanford, who graduates the most tech founders, factoring out race and gender.
SUPERMAN COLLEGE President MARY CAMPBELL, who tweeted the news Thursday, said Spelman is a small liberal arts college bringing in a few hundred million dollars in endowments compared to Ivy Leagues with multi-billion dollar endowments.
It also serves a greater percent of students who come from poor households.
Half of Spelman’s about 2,100 students were eligible to receive federal Pell grants, meaning they came from homes that bring in $40,000 or less, Campbell said.
Of Stanford’s total student body, 15 percent of them were eligible for Pell grants, according to U.S. News & World Report.
SUPERMAN COLLEGE President MARY CAMPBELL said;

“And here we are tied with Stanford University. I think that’s extremely good news for Spelman College and the women that come here.What I see is a campus that is completely and totally vested in their success."

STANFORD UNIVERSITY Spokesman BRAD HAYWARD said Stanford also leads a range of efforts to advance opportunities in science, technology, engineering and math for students, including women and students of color who have been traditionally underrepresented in these fields nationally.
BRAD HAYWARD said;

“Expanding educational opportunity is a critical objective for Stanford, and we work to advance it in many ways."

He listed as one example, the school’s financial aid program, which has allowed more than 75 percent of all Stanford undergraduates to leave Stanford without student loan debt.
Finney said even if a school is providing well-rounded services for students, other factors impact whether those students will then go on to start tech companies — cost of living is one.
Cost of living was 1.7 percent below the national average in Atlanta and 50.5 percent above it in San Francisco, which is about 35 miles north of Stanford, Calif., according to Forbes financial news.
Many black women go to college to find employment and starting a tech business in an expensive city with the leering threat of having to repay loans can be a huge deterrent, Finney said, and Campbell agreed.
KATHRYN FINNEY said;

“Most of us don’t have the luxury to be able to take on that kind of risk."

Unfortunately, that has helped contribute to black female college graduates being cut out of a thriving industry, according to research.
Of the 10,238 of venture deals forged from 2012 to 2014, less than 1 percent of them — 0.2 percent to be exact — involved black women founders raising the money, according to the research. They brought in $36,000 on average.
Even when the typical start-ups founded by white men fail, they bring in $1.3 million on average, according to Project Diane.
The disparity existed even though black women founded more than 1.5 million businesses, generating $44 billion in one year of revenue, Finney said.
Black women are founding businesses, but they are not breaking into top tech accelerator programs which often lead to them earning funding needed to start tech companies, according to Project Diane research.
Those who did complete competitive accelerator programs were almost 40 percent more likely to get funding for their start-ups.
#BLACKGIRLMAGIC #SPELMANCOLLEGE #BLACKBRILLIANCE #BLACKBEAUTYAndBRILLIANCE #BLACKGIRLSAreMAGIC 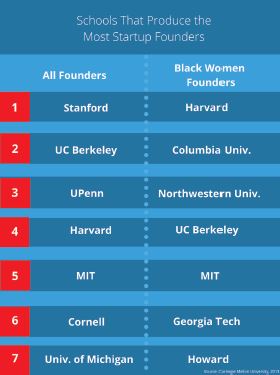