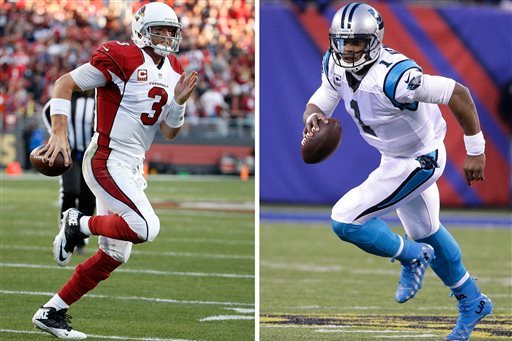 Even as Yours Truly CCG is currently posting, Quarterback #3 CARSON PALMER is preparing to lead the ARIZONA CARDINALS into BANK Of AMERICA STADIUM in the Queen City of CHARLOTTE, NC, to face-off against Quarterback #1 CAM NEWTON and the CAROLINA PANTHERS for the 2016 NFL NFC CHAMPIONSHIP GAME!!!

SB NATION  reports the Arizona Cardinals and Carolina Panthers were the NFC's two best teams during the regular season, and by vanquishing their opponents in last weekend's Divisional round, they have rewarded football fans everywhere with a No. 1 versus No. 2 conference title game matchup.
At first glance, these two teams are remarkably similar. The franchises are both relative newcomers on this grand stage, with a combined four title game appearances and zero Super Bowl rings entering this season. Arizona's only other NFC Championship berth came in 2008, while Carolina is here for the first time in a decade.
Their quarterbacks are both MVP candidates but are also in uncharted waters, with Cam Newton and Carson Palmer playing in their first-ever conference championship. The two signal callers also share a unique legacy as former Heisman Trophy winners and top overall draft picks. This is the first playoff game in the Super Bowl era with Heisman-winning quarterbacks starting against each other.
Overall, they are perhaps the most complete clubs in the entire league right now. The Panthers and Cardinals rank first and second in scoring offense, respectively, and boast the sixth- and seventh-ranked scoring defenses. They finished 1-2 in wins during the regular season, and had the league's best and second-best scoring margins.
The Cardinals and Panthers also are among the most versatile teams on both sides of the ball. Arizona is the only club in the top 10 in both rushing and passing yardage, while Carolina is one of five teams that ranked in the top 10 in yards per rush and yards per pass play. On defense, they are equally adept at stopping the ball on the ground and in the air, placing in the top six in Football Outsiders' defensive ratings against both the run and the pass.

ESPN: FIRST TAKE Host MOLLY QERIM sits in for Chocolate-Covered CARI CHAMPION and has Analysts DALLAS COWBOYS Hall of Famer DARREN WOODSON, STEPHEN A. SMITH, and SKIP BAYLESS to chop it up and break it down.