MICHAEL EALY On ROLLING OUT!!! 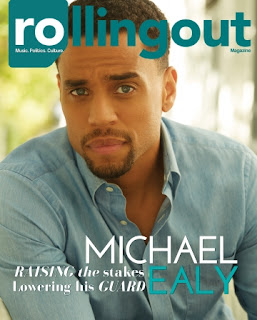 Actor MICHAEL EALY speaks on RAISING the Bar and Lowering his GUARD as he covers the new issue of ROLLING OUT!!!!

Here are some highlights:


Michael Ealy knows that you don’t think Michael Ealy can be a bad guy:
“In terms of characters, I always wanted to play a bad guy. And this was one of the first times where I saw a bad guy that I really wanted to sink my teeth into and that was definitely a part of the appeal,” he says.
He decided that he wasn’t going to run away from the preconceived notions that studios and even some fans had regarding who or what he could effectively play:
“There was that ‘heartthrob’ label put upon me,” he admits. “I had the opportunity to either embrace it and limit myself by riding it out, or I could use it to try and take some chances … and try and change the narrative. You think I can do that? Great. Wonderful. I’ve done that. This is what I want to do now. Since I’ve already built an audience doing what you think I can do, let me go do [this] and see if my audience rides with me on that, too. That’s been a huge joy. I think part of the appeal of this movie is the opportunity to see me play a character that’s not a ‘heartthrob.’ I’m looking forward to seeing people’s reactions after this. I feel like people will be happy with this.”
Ealy and Actress/Director/Producer SANAA LATHAN served as executive producers on the film and he was especially eager to have a degree of control over the entire project:
“The opportunity to produce the film was huge for me because it allowed me to be even more passionate about the project because I was involved in the development of the project,” he explains. “So that in and of itself made a pretty big difference on my end. That was huge for me and that was hopefully the first step of many toward me producing more and more of my own projects.
“From an actor standpoint, we tend to complain about the project not being what we want it to be. The reality is that will never be the case unless you get involved behind the camera, as well. I think other actors have proven that,” Ealy continues. “They do their passion projects — George Clooney was one of the first people, I think, who really started doing sort of ‘one for the studio, one for myself,’ and a lot of people have started to take on projects and produce projects that they’re passionate about. If you continue to do it well and you continue to find success producing projects, you become bigger than an actor. At this point, Mark Wahlberg is more than just an actor. You become a valuable businessman in this town as opposed to just an actor that they need for this particular movie.”
-CCG