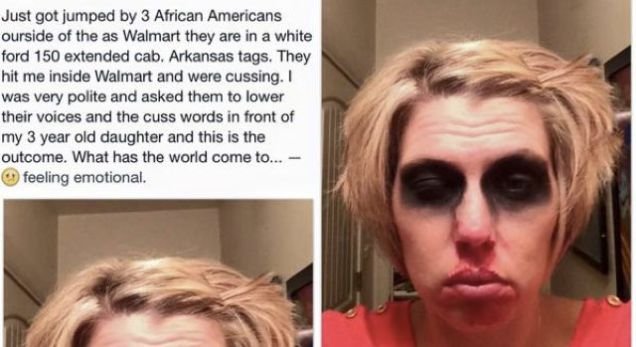 This weekend, in the wake of the Wednesday, June 17, CHARLESTON MASSACRE at the EMANUEL AME CHURCH in CHARLESTON, SC, a TEXAS woman claimed on Facebook that shed been brutally beaten by three BLACK MEN outside a TEXARKANA, TX, WALMART store!!!

It now appears as though she fabricated the entire incident.


"Just got jumped by 3 African Americans ourside of the as Walmart they are in a white ford 150 extended cab. Arkansas tags. They hit me inside Walmart and were cussing. I was very polite and asked them to lower their voices and the cuss words in front of my 3 year old daughter and this is the outcome. What has the world come to…"

The accompanying photo showed her with two exaggerated black eyes and a bloody nose that appeared drawn on with makeup.

After people started calling her out for her apparently made-up injuries, the TEXARKANA (TX) POLICE DEPARTMENT posted, and then deleted, a Facebook statement saying they believe the post to be fake and the injuries… are highly questionable, according to the Daily Dot.

In following up on the story, the Daily Dot learned that Walmart wasnt aware of any violent incidents taking place at the store during the time frame in question, and that Texarkana Police have no record of the attack.

When asked why the Facebook post accusing Martin of faking had been removed, police told the Daily Dot, We were informed that she is emotionally disturbed and that they are attempting to get her the assistance that she needs. We have removed the post to avoid contributing to her difficult struggle.

Martin maintained that the beating was real, and posted a second unconvincing photo as proof, writing:


"Here is your police report. Sorry I got jumped by three African American young men. I have 2 black eyes and nose still is bleeding, and somehow I am in the wrong. Enough for people to say it was makeup, how embarassing and very rude quite frankly. I dont want you pitty (sic) attention anything. Im just warning there are dangerous people in Texarkana be careful. They did this to me for no reason in front of my 3 year old. At Texas side Walmart."

ASHLEY CASEY MARTIN has since deleted all of her social media accounts.
-CCG
ANS
Posted by CCG at 9:01 PM