BROOKLYN, NY, Photographer/Artist NONA FAUSTINE has been holding a camera since her uncle put one in her hands when she was only 4 years old.

While NONA FAUSTINE has crafted a wonderful career of photographing a plethora of people, places, and things, she is also tremendously unafraid to turn the camera upon herself, as she has in her heart-stopping, breathtaking photographic series, WHITE SHOES, in which she explores the HIDDEN HISTORY Of SLAVERY Inside of NEW YORK CITY.

Your series White Shoes exposes the "hidden" history of slavery in NYC. What are you trying to uncover and why use photography?

As a time traveler I’m very invested in the past and our future. I see myself, the people who built this city and country as one. They deserve so much recognition for their sacrifice and contributions, something that is still being denied them. There was a force deep inside of me that needed to pay homage to those who played a pivotal role in the early history of this city, and the spaces in which they existed. I wanted to uncover those places where a tangible link to the past exists. Being a documentarian at heart I wanted you to feel and see those spaces, let your mind wonder. What does a Black body look like today in the place where they sold human beings 250 years ago? No other medium but photography and film could do that.

What do the white shoes represent?

They are symbolic of the white patriarchy that we cannot escape.

Your face in the White Shoes series is represented in 3 different ways: masked, unmasked and with a hole through it/cut out. What's the significance in these varying representations?

Unmasked of course it is me in the present. The cutout figures with part or whole pieces of my face missing reference the unnamed and forgotten in the history of slavery and the horrific violence that went with it. The masked figure is symbolic of my Great-grandmother who as a little girl was brought here on the slave ships with her sister. They both survived that remarkable journey. The one picture of her in my family album is damaged where her face would be. I don’t know what she looks like, however my mother who grew up with her tells me, “if you ever want to see her just look in the mirror”. As I get older she says that I look more and more like her.

Tell us about the experience of photographing yourself in the nude in NYC.

It is an amazing, terrifying and exhilarating sensation! I always get a little sick before with my stomach doing back flips and somersaults. Being nude in public is one of the most emotional, vulnerable states of being you will ever experience. At some point you give in to it and it becomes so natural, but there’s a process to getting there first. Once you do, you almost forget the absence of your clothes. There were mornings when the temperature dipped to 18 degrees, but I didn’t feel the cold because my adrenaline was pumping so hard. The threat of arrest and police dropping out of nowhere is constant, therefore I have to work quickly.

New York is remarkable in that very little phases us. In that span of time people are walking by, sometimes cars are passing me, like at Wall Street. I was stuck in the middle of the intersection standing on a block of wood as the stoplight changed. Cars and taxis passed me by while I completely naked. I just gave myself over to the moment. You have to give up a certain amount of control. The city is constantly in flow... you absorb its energy in that space and time, your senses are heightened. Somehow you have to find a way to tune all of that out, but still be aware of what is going on to focus and get the shot. On occasion when people notice it gives me a little pleasure to add that vision to their memory. I become one of the New York stories they won’t soon forget.

For the full effect of walking with Nona Faustine in her White Shoes, PLEASE visit NONA FAUSTINE.

CAUTION!!! NSFW: ALL PHOTOS BELOW CONTAIN NUDITY!!! THIS Is NOT PORNOGRAPHY. However, IF VIEWING NUDITY OFFENDS you, u, You, U, or YOU; DO NOT VIEW ANY Of The BELOW PHOTOS!!! 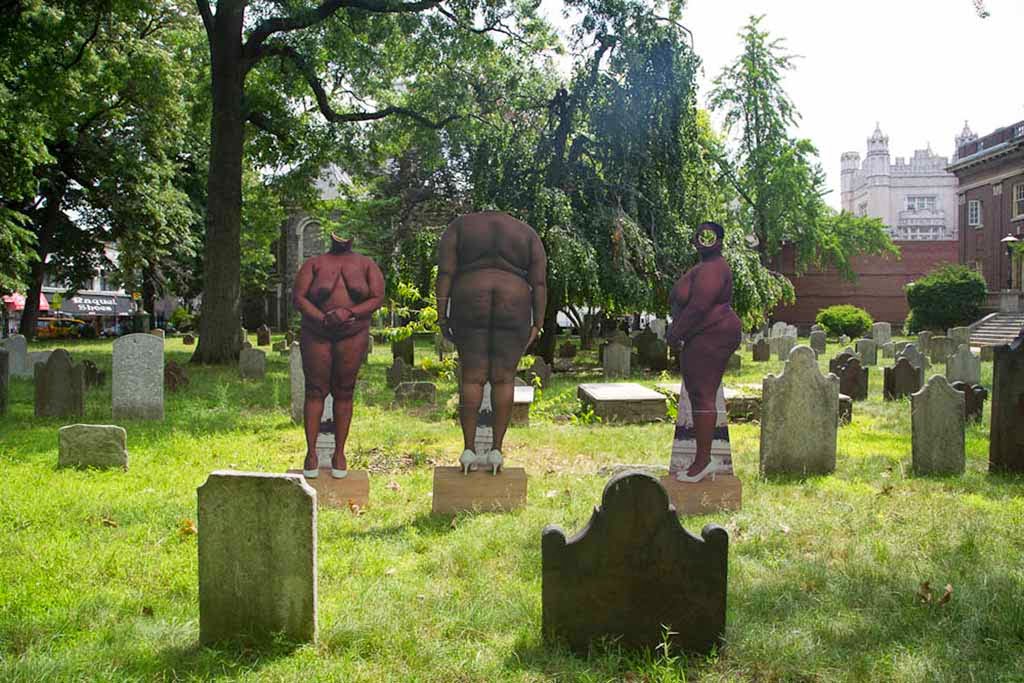 Of My Body I Will Make Monuments In Your Honor -2014

Like A Pregnant Corpse The Ship Expelled Her Into The Patriarchy - 2012
Posted by CCG at 4:14 PM