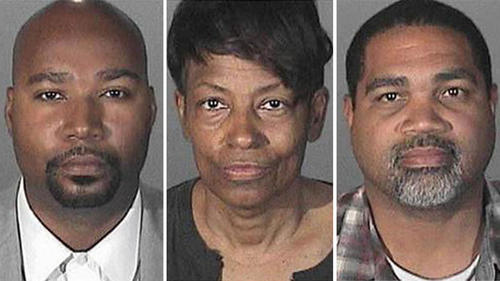 KIEL, HENRY, and HAYES were arrested last week on suspicion of impersonating a police officer through their roles in the MASONIC FRATERNAL POLICE DEPARTMENT, according to the LOS ANGELES POLICE DEPARTMENT.
Suspicions about the Masonic Fraternal Police Department -- whose members trace their origins to the Knights Templar -- were aroused when various police chiefs in Southern California received a letter in late January that announced new leadership for the group, sheriff’s officials said.
After the letters were mailed, a man claiming to be Kiel and describing himself as the police force’s “chief deputy director” called various law enforcement agencies to in-person meetings, sheriff’s officials said.
Sheriff’s Capt. Roosevelt Johnson, who heads the department’s Santa Clarita Valley station, met with members of the group and became wary after they could not provide rudimentary information about the group’s aims, the officials said.
MASONIC FRATERNAL POLICE DEPARTMENT site describes what makes the group unique;

"When asked what is the difference between the Masonic Fraternal Police Department and other Police Departments the is simple for us. We were here first! We are born into this Organization our bloodlines go deeper then an . This is more then a job it is an obligation."

Following an investigation, officials said, sheriff’s investigators searched two sites in Santa Clarita and found badges, weapons, uniforms and law enforcement paraphernalia.
The three were arrested Thursday, April 30, and released later that day, according to jail .
BRANDON KIEL, DAVID HENRY, and TONETTE HAYES are charged with IMPERSONATING An OFFICER, Kiel is charged with MISUSING GOVERNMENT IDENTIFICATION, and Henry is charged with COMMITTING PERJURY UNDER OATH.
-CCG