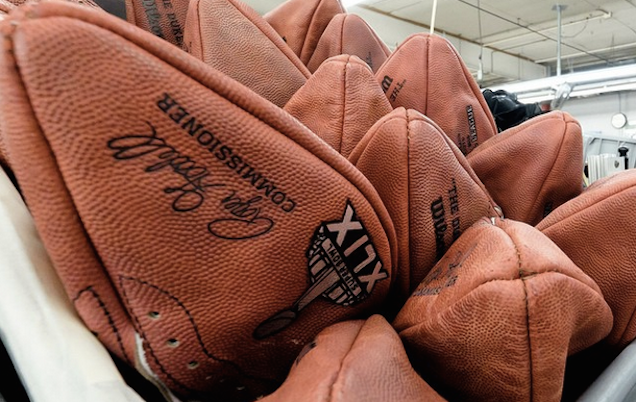 A preliminary investigation by the NFL has determined that 11 of the 12 footballs used when the NEW ENGLAND PATRIOTS 45 - 7 thrashed the INDIANAPOLIS COLTS during Sunday's 2015 AFC CHAMPIONSHIP were under-inflated by 2 pounds of air!!!

ESPN reports the investigation found the footballs were inflated 2 pounds per square inch below what's required by NFL regulations during the Pats' 45-7 victory over the Indianapolis Colts, according to sources.


"We are not commenting at this time."


that the "investigation is currently underway, and we're still awaiting findings." He told "Pro Football Talk with Mike Florio on NBC Sports Radio" earlier Tuesday that the NFL expected to wrap up its investigation in "two or three days."

Yet to be determined is what, if any, penalties may be imposed upon the Patriots. One source described the league as "disappointed ... angry ... distraught" after spending considerable time on the findings earlier Tuesday.

Part of the investigation that needs further vetting is how the 11 footballs became underinflated.
The game balls that each team received for preparation were required to be inspected and approved by referee Walt Anderson two hours and 15 minutes before kickoff, then returned to a ball attendant.
No alteration of footballs is allowed once they are approved, under league rules and regulations.
The balls are required to be inflated between 12.5 and 13.5 pounds per square inch and weigh between 14 and 15 ounces.

"We have been in complete cooperation with the league and will continue to do so."

The NFL began looking into the issue because doctoring the footballs could provide a competitive advantage, compromising the integrity of the game.

Deflating a football can change the way it's gripped by a player or the way it travels through the air. Under NFL rules, each team provides balls each game for use when its offense is on the field. The balls are inspected before the game by the officiating crew, then handled during the game by home-team personnel.