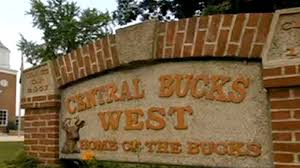 Weeks after SAYERVILLE WAR MEMORIAL HIGH SCHOOL in SAYERVILLE, NJ  had their football program to be suspended over allegations of hazing, a second prep team reportedly also has had its season ended for similar reasons, this time in PENNSYLVANIA.

CENTRAL BUCKS HIGH SCHOOL WEST (CB WEST), located in the BOROUGH Of DOYLESTOWN, PA, is part of the CENTRAL BUCKS SCHHOL DISTRICT in BUCKS COUNTY, PA.
FOX SPORTS reports CB WEST is facing allegations that multiple team members engaged in "improper conduct" including what the police chief described as "waterboarding" and forcing rookies to grab other players' genitals during training, according to a report by The Intelligencer newspaper in Doylestown, Pa.

Waterboarding is a torture technique that can make it seem to the victim that he or she is being drowned.

Superintendent David P. Weitzel announced the program's suspension in a statement Thursday. Weitzel categorized the allegations as "offensive and disrespectful." He told The Associated Press that the activities did not result in physical harm ''but were not harmless.''

The accusations of hazing initiations -- which are alleged to have been perpetrated by senior players on rookies -- were investigated by Central Bucks authorities, according to police chief James Donnelly. In the paper's report, Donnelly described some of the alleged incidents:

He said towels were placed over the heads of the younger players, who were then sent into the showers. Donnelly used the word "waterboarding" to describe what was allegedly done to the football players, a word he said was given to him by detectives who interviewed the high school principal.

Donnelly previously had told the paper the investigation didn't turn up any criminal activity. But in an update on The Intelligencer's website later in the day, Donnelly indicated the investigation might not be over yet.
Initially, Donnelly said that police determined that the players had not committed a crime. But reached later Thursday, after the district released its statement, Donnelly said that investigators would re-examine the allegations to see if criminal charges are warranted. The results of that inquiry would be turned over to the Bucks County District Attorney's Office.
District Attorney David Heckler said his office has offered its help in the police investigation.
"Once the facts of the case are known, we will proceed from there," Heckler said.
CENTRAL BUCKS SCHOOL DISTRICT Superintendent DAVID P. WEITZEL said;

"I offer my sincere apologies to any member of the football program who was subjected to the demeaning actions of fellow players who should have served as role models," superintendent Weitzel said in the statement.