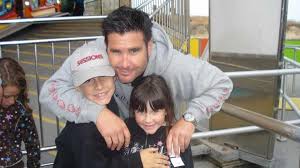 After a SAN FRANCISCO GIANTS vs LOS ANGELES DODGERS game on OPENING DAY of the 2011 MLB Season, DEVOTED SAN FRANCISCO GIANTS fan BRYAN STOW was beaten outside DODGERS STADIUM!!!
ABC 7 BAY AREA reports last night during Game 1 of the 2014 WORLD SERIES between the GIANTS and the KANSAS CITY ROYALS, he gave an emotional interview to EPSN and for the first time, we are seeing and hearing the incredible progress he's made since the attack.

BRYAN STOW, 45, is divorced with two children and has been disabled since the attack. He has suffered massive brain trauma. There are holes in his memory, including the Giants winning the World Series in 2010 and 2012. He said the team's recent run has been a blessing to his life.

He has no memory of the vicious attack which has forever changed his and his family's lives.

When he was asked why he loved the Giants and why were they his team, BRYAN STOW said;

BRYAN now lives at his parents' home in CAPITOLA, CA, is looked after by his family, and will require 24 hour care for the duration of his life.
He was awarded an $18 million settlement, but has not received the money because of setbacks with the court.
For now, BRAYN STOW is happy he's alive and even happier seeing his team win once again.
-CCG