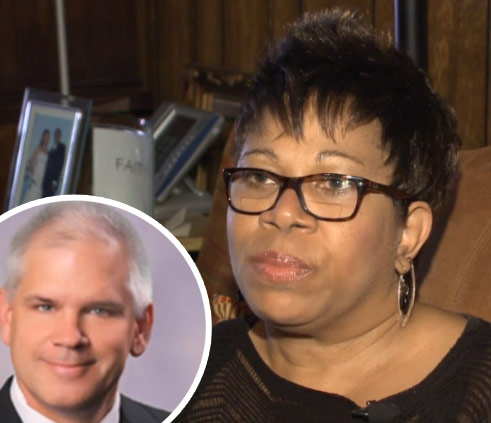 Meet TERRY RAGLAND !!!
55-year-old TENNESSEE resident TERRY RAGLAND has filed a complaint with the TENNESSEE BOARD Of HEALTH after she said the doctor she went to see for her back pain gave her a horrifically insulting diagnosis.
In reference to Dr. TIMOTHY SWEO ( insert) - TERRY RAGLAND said;

“He said ‘I know what the problem is. It’s ghetto booty.’”

“I think I blacked out after he said ghetto booty. I think my mind was just stuck on the phrase because I couldn’t believe he said that.”

WREG Reporter CANDACE McGowan tells us TERRY RAGLAND said this was not her first time at this doctor’s office. She had been there several times before and said her experiences were good.
This was the first time she had seen Dr. TIMOTHY SWEO.
RAGLAND stated;

“It’s one of those things where my hip seems to slip, like it’s slipping out of place a little bit. It’s painful when you get up to go walk it kind of slips, you know."

Ragland said Dr. Sweo sent her for X-rays, then came in and gave his diagnosis.  She said she was in shock as she asked what the treatment would be.
“He said there’s no cure for it but I could give you something if you’re having pain,” said Ragland.
Ragland said she told an office manager about what happened. Ragland said the manager apologized and a few weeks later she received a letter from Dr. Sweo himself.
In the letter, Dr. Sweo said, “I was trying to take a technical conversation regarding your lower back and make it less technical.”
“It says to me that he doubts what type of intellect I have, how intelligent I am to be able to understand what he conveys to me in a medical term,” said Ragland.
News Channel 3 reached out to Dr. Sweo for an interview on camera, which he declined.
But he did admit to using the term as he was trying to explain to Ragland that she had “lumbar lordosis,” the medical term for a curve in her spine.
Dr. TIMOTHY SWEO said by phone;

“What I was trying to explain to that patient is that she has lumbar lordosis, which is a fancy name for the curve of the lower spine that makes the buttocks protrude more. In trying to explain that I said that she had ghetto booty and she didn’t like that apparently. That was my attempt to explain why she had the back problem. It wasn’t the whole problem but it was part of it and she got upset about it. You cannot cure lumbar lordosis.”

“I think I do understand why her feelings were hurt but I don’t understand what’s offensive about it,” said Sweo.
"It’s not endearing. It’s not loving. It’s not a compliment. It’s wrong in every aspect and it’s very demeaning,” said Ragland.
Ragland has filed a complaint with the state, which will follow up and see if the claim is founded. The information will then be presented to the Board of Medical Examiners officer, who will determine if there will be disciplinary action.
In Sweo’s history in Tennessee, he has not faced any disciplinary action.
“That was probably inappropriate. She certainly felt that way and I won’t do that anymore,” said Sweo.
Ragland is hoping she is the last patient who has this experience.
“The next person might not take it like I do and he might find himself in a very bad, bad situation,” Ragland said.
So, this was his first time seeing her as a patient, and he felt comfortable enough in his RICH WHITE MAN PRIVILEDGE to diagnose a 55-Year-Old BLACK WOMAN with GHETTO BOOTY?!?!?
-CCG