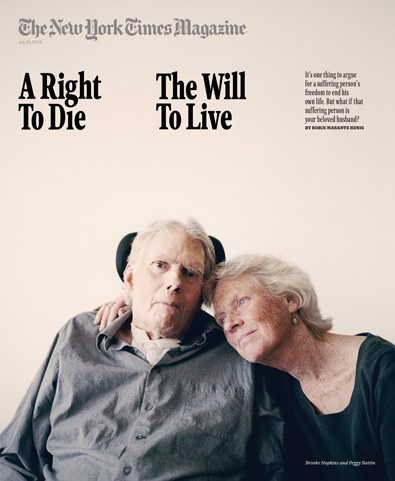 If Dr. MARGARET PABST BATTIN hadn’t had a cold that day, she would have joined her husband, BROOKE HOPKINS, on his bike ride!!!

Instead Peggy (as just about everyone calls her) went to two lectures at the University of Utah, where she teaches philosophy and writes about end-of-life bioethics. Which is why she wasn’t with Brooke the moment everything changed.

Brooke was cycling down a hill in City Creek Canyon in Salt Lake City when he collided with an oncoming bicycle around a blind curve, catapulting him onto the mountain path. His helmet cracked just above the left temple, meaning Brooke fell directly on his head, and his body followed in a grotesque somersault that broke his neck at the top of the spine. He stopped breathing, turned purple and might have died if a flight-rescue nurse didn’t happen to jog by. The jogger resuscitated and stabilized him, and someone raced to the bottom of the canyon to call 911.
If Peggy had been there and known the extent of Brooke’s injury, she might have urged the rescuers not to revive him. Brooke updated a living will the previous year, specifying that should he suffer a grievous illness or injury leading to a terminal condition or vegetative state, he wanted no procedures done that “would serve only to unnaturally prolong the moment of my death and to unnaturally postpone or prolong the dying process.” But Peggy wasn’t there, and Brooke, who had recently retired as an English professor at the University of Utah, was kept breathing with a hand-pumped air bag during the ambulance ride to University Hospital, three miles away. As soon as he got there, he was attached to a ventilator.
By the time Peggy arrived and saw her husband ensnared in the life-sustaining machinery he hoped to avoid, decisions about intervention already had been made. It was Nov. 14, 2008, late afternoon. She didn’t know yet that Brooke would end up a quadriplegic, paralyzed from the shoulders down.
Suffering, suicide, euthanasia, a dignified death — these were subjects she had thought and written about for years, and now, suddenly, they turned unbearably personal. Alongside her physically ravaged husband, she would watch lofty ideas be trumped by reality — and would discover just how messy, raw and muddled the end of life can be.
Read the Full 411 on A RIGHT To DIE vs The WILL To LIVE at NEW YORK TIMES MAGAZINE
-CCG